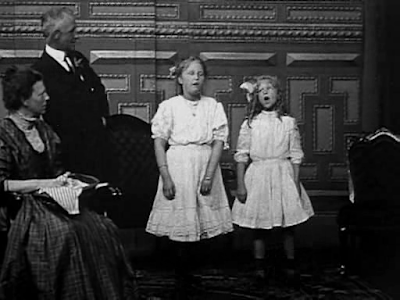 “A few days before Christmas…”
…five childrens’ furrowed faces break to grins.
They set aside their books and magazines
And greet the man of means who sired them;
The man whose wealth of festive cheer inspires them
To learn the lines of pageant script their mother’s writ.
“Christmas Eve—The Prologue…”
…in which, in matching white, the girls duet.
At left their parents primly sit, and
gently praise each poorly practiced pageant step,
each ode half-hearted—oh, they would so envy me,
These parents—forced to hear what I but see.
“The Play…”
…is mostly pantomimed domestic fray:
A son and daughter, accoutered like their
Mother and father, dress down their sister.
Tapping fingers in her face in mock debase
‘til littlest brother drives them off with knife
And gun—I’m guessing each a phoney one.
It’s hard to tell the difference, from this distance,
‘tween a toy gun and a real one, and
I can’t afford a closer look at either.
“The Author’s Reward…”
…the performance ended, the children bedded,
Father takes his author bride in-hand; with
Victorian decorum, grants her kiss;
Spawns her grin, a touch of cheeks; a blushing.
They murmur, tenderly.
Though like the childs’
tuneless renderings it is, to me, Inaudible.
Mute as an empty box or a cold bed;
As soundless as the Ghost of Poverty,
Who, through this froze and gilded window, peers.
Apprehending richness nestled near:
The spoils of another’s fortunate year.

Where to find A Holiday Pageant at Home:
This five-minute short is the first selection on Kino Video’s A Christmas Past, a DVD that also includes films by D.W. Griffith and Edwin S. Porter.
Posted by Chris Edwards at 10:05 AM

Email ThisBlogThis!Share to TwitterShare to FacebookShare to Pinterest
Labels: Kino Christmas Past Poetry