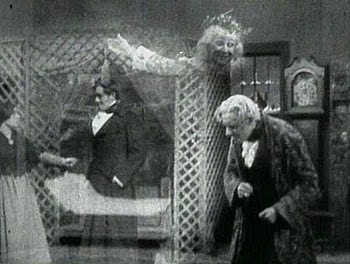 Fixed-camera silents are the most maligned, least appreciated form of film. Made from the 1890s to about 1916, they pre-date the mastery of pans, zooms, close-ups and other techniques we now consider basic to filmmaking. They’re blatantly theatrical in style and staging. They receive little attention, even from lovers of silent film, and when they are discussed, it’s usually in terms of what they lack. They’re treated as artifacts, not art.

And yet, there were men like J. Searle Dawley making them—individuals unwilling to just set a camera in place and allow non-professionals to plod their way through pantomime before it. I’ve already written about Dawley’s Frankenstein (1910), a film with great psychological depth, despite its brief running time. And I’ve told you about his Snow White (1916), which maintains both a theatrical and cinematic aesthetic, side-by-side. Dawley’s not just a transitional filmmaker; he’s a filmmaker who used a transitional form. And within his spaces, limited by a single set, perhaps, and that fixed lens, much goes on.

Anyway. Dawley faced less of a challenge with A Christmas Carol than he did with Frankenstein. The book’s shorter, less complex, and the story better known. Who, in the West, hasn’t heard the tale of ‘hard-fisted miser’ Ebenezer Scrooge, visited first by the ghost of his partner Marley, then by the specters of his Past, Present, and unfortunate Future, culminating in a Christmas morning change-of-heart, and new-found love of his fellow man? Few stories are more purely character-driven, or more adaptable to a ten-minute film like this one.

Dawley opens in a very cramped version of Scrooge’s office. In the foreground, preternaturally large, is Scrooge’s empty chair. In the background is Cratchit, hunched and scratching at a ledger. Scrooge arrives, berates Cratchit for something likely made clear in the book, then takes his seat. He seems very big too. Instantly, a snowy trio of Charity Relief Committee members burst through his door and make their appeal. They’re quickly dismissed, and no sooner do they leave than Scrooge’s nephew and his friends blow in. They too are dispatched. The pacing recalls farce comedy, and with only ten minutes to spare, that’s probably best.

The film’s whole visual style is established in this first scene. The camera is set at medium shot, but Scrooge (Marc McDermott) freely crosses from background to foreground. The furnishings in his office—his chair, the door frame—loom over the people. The frame is very tight, pushing inward, always feeling clenched or closing, like Scrooge himself. And so, when groups like the Committee erupt into his space, it’s like a violation. 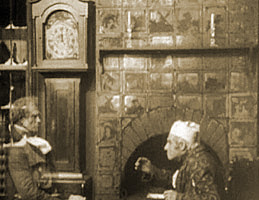 Scrooge goes home. Night falls. Dawley now films McDermott hunkered in the extreme low end of the frame, beneath a grandfather clock that seems enormous. Marley’s ghost exhorts Scrooge, unsuccessfully, to reform. The double-exposure here is perfect—Scrooge passes a hand through the middle of his dead partner in the course of conversation.

In the spirit of economy, Dawley uses one ghost for all three of Scrooge’s bedroom visitations. The sequence has a remarkable poetry, beginning with Scrooge at far right and the ghost in the middle, beckoning left toward his empty bed. We see images of Scrooge’s past—love squandered, roads not taken—but the bed, a symbol of fertility and sex, remains visible behind them. When they vanish, its emptiness remains.

Dawley now cuts to the right of the set. Scrooge starts on the far right, then moves left and toward the lens, growing in size. The ghost reappears in the middle, like a partition, and on the right, we see images of Cratchit’s impoverished brood and Scrooge’s nephew’s money woes, which prevent him from marrying the girl of his dreams. These images are small and dreamlike, though they’re the same size Scrooge was a moment before. Scrooge’s cold hearth can always be seen through them. 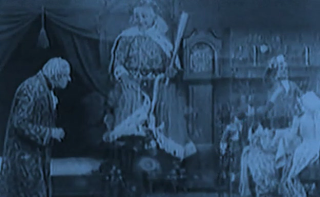 The triptych is completed when the ghost, now in a death-shroud, again beckons Scrooge to view his bed. Scrooge kneels beneath the towering ghost (as he did earlier beneath the grandfather clock), and we view images of his death-throes, then his tombstone. Unlike the earlier visions, these ones are opaque. The future Scrooge clearly dies in his bed, but the image is a closeup, superimposed over his present bed, which is now obscured. The tombstone seems like a drawing.

The visions of the past evoke regret in Scrooge; those of the present evoke guilt. Those of the future—the ones that finally rouse him to reform—evoke fear. And significantly, it’s only this third set of images that abandon present reality. Death is the ultimate breach: the only place we can go and be completely divorced from our position and our memories.

Morning comes. Appropriately, Dawley shoots this scene from an entirely new angle. The reborn Scrooge leaves his bed and jigs across a vast, black curtain to reach the window, below which the carolers sing. Outside, he happens upon the Committee members and pays them handsomely. Then his nephew arrives, and they’re reconciled. Then he visits Cratchit’s kid-filled house, bringing the goose, as always. His nephew and a female companion join too, making the house very full, but Scrooge is smiling. In pacing and style, Dawley’s Christmas poem ends as it began.

All this in ten minutes. Films like A Christmas Carol remind us that great cinema didn’t start in 1915—that the artistic minded were finding their way before that. Shine enough light and we’ll see you, Mr. Dawley.