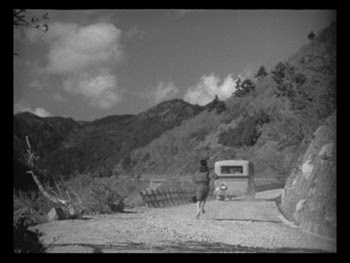 Sweet and earnest, Dora Kennel is the deadliest friend a girl could have. For all her good intentions, heart-faced Dora is the beginning and end of everything bad that happens to anyone in Japanese Girls at the Harbor. She makes victims of them all.

Dora (Yukiko Inoue) has a gift for giving bad advice. Most of it goes to Sunako Kurokawa (Michiko Oikawa), who is her best friend, fellow student, and the lover of Henry (Ureo Egawa), a badboy-wannabe whom Dora loves, too. Sunako isn’t much of a pal—she ditches Dora for Henry the minute his motorcycle rumbles up—but Dora doesn’t mind. “I sincerely hope you and Henry will be happy,” she tells Sunako, methodically. Henry has another girl on the side, an easy treat named Yoko Sheridan. “If you really love him, you have to overlook his faults,” says Dora. Sunako concurs; she tails the couple on a date, corners them in a church, and appears to gun down Yoko. Then she flees Yokohama and becomes a whore. 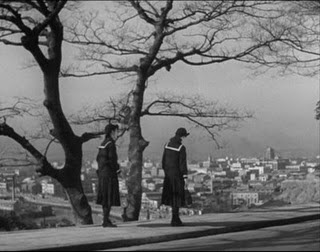 If you think Sunako is the weaker-minded of these two, you’d be wrong. Sunako's the tough one—Dora is a mouse, and I think she gives advice she wishes she was brave enough to follow herself. But fate favors her. With Sunako and Yoko out of the picture, Dora becomes Henry’s wife. And everything is fine—at least, for Dora—until Sunako comes home. 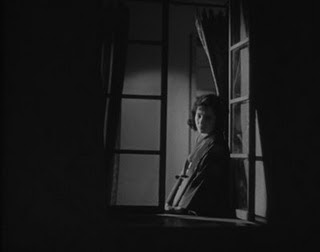 Bad advice: You can hate someone for giving it to you, but you can only blame yourself for following it. I think this is the message director Hiroshi Shimizu wants us to take from Japanese Girls, an occasionally beautiful film that seems determined to tell us something, somehow. Though a very late silent, it is a kindred of the morality plays of the ’teens—films that presented a Truth, then used actors to dramatize it. Characters were often nameless in these early films, or went by labels like ‘Mother’, ‘Fallen Woman,’ or ‘Vagabond.’ Shimizu’s characters have names, but they don’t really need them.

Some dismiss these early films as simplistic, as though depth of character were some sort of ultimate good. But when an audience knows it’s being lectured to (in the most positive sense of the word), it frees the director to blatantly intrude on his or her own tale without damaging it. In Japanese Girls, Shimizu mixes real scenery with fake-looking sets; naturalism with abstraction—his camera glides across Yokohama’s harbor in smooth, unbroken shots that give you the distinct impression that he desires you to see that harbor. Shimizu’s actors don’t always leave a room; sometimes they just fade from a shot when their value to Sunako and Henry is through. And the director’s occasionally jagged, jarring cuts would please Sidney Lumet, I think. 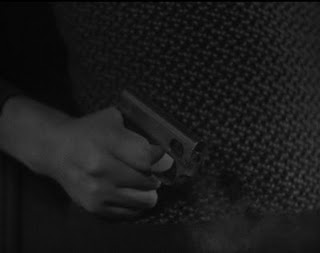 Amid all this—in a film only 72 minutes long—no performance could be subtle. Oikawa’s prostitute spends much of the film with a seen-it-all smirk on her face, but collapses into grief and regret the moment a door closes. Inoue and Egawa seem puzzled most of the time, as does Sunako’s tag-along artist boyfriend, Miura (Tatsuo Saito). They seem dragged along by events. It is striking how Henry and Dora react to Sunako, despite the obvious awkwardness of their situation.

I wonder what you’ll think of Sunako’s final choice, or the reason she makes it. I’m ambivalent about it myself. She’s the only person with any real strength or intellect in this film—the only one with the means to escape the cycle of bad decision-making that swamps everyone else. But is her solution to the love triangle a rational one? Is the ‘lesson’ she takes from it correct? I don’t think she has a hope in hell of successfully applying it. However, I do think she’s the only character in the film who would try. 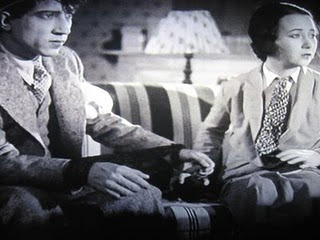 Japanese Girls at the Harbor gives you a lot of pieces, but not much in the way of instructions. Your means of assembly may therefore vary. What I believe is that, with his deliberate story-telling, abstract and extreme camerawork and equally abstract and extreme characters, Shimizu is erasing boundaries. Physical reality, which these men and women can adapt to but never deny, merges with ideas like identity and obligation, which can be denied so long as one refuses to adapt to them. But not one of these characters can tell the difference anymore. It's Shimizu's goal to make us feel the same way.

Where to find Japanese Girls at the Harbor:
Minato no nihon musume is available on disc one of Criterion’s four-disc set, Eclipse Series 15: Travels with Hiroshi Shimizu.
Posted by Chris Edwards at 8:48 PM