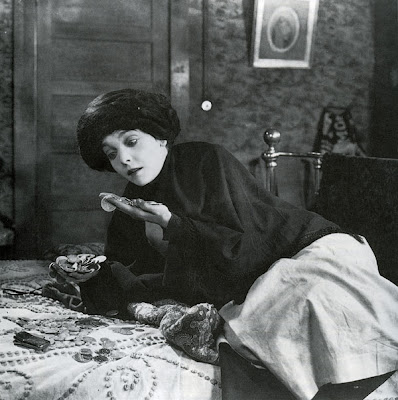 Greed is the most famous film directed by Erich Von Stroheim, a man known for his relentless, unbending approach to filmmaking. Originally ten hours long, it survives today in two versions: one a four-hour ‘restored’ print featuring stills in place of missing footage; the other about two hours. I’m glad I saw the shorter version. I couldn’t have taken much more.

It’s the people, you see. They’re so uniformly awful. Unpleasant to watch, ugly, impossible to empathize with or even analyze. You can’t get inside the heads of Greed’s main character, John ‘Mac’ McTeague (Gibson Gowland), or his ghoulish wife Trina (ZaSu Pitts) and god help you if you could. They’re both monsters; standouts among Von Stroheim’s parade of freaks and weirdos who take every role that might otherwise be filled by a comfortably appealing human being. Don’t ask me what these people would look like with sympathetic makeup, proper clothes, or good lighting—I only know how they made me feel in Greed.

McTeague is a backwoods gold-miner with lots of temper and little brain. His mother (Tempe Piggott) wishes a better life for him. When a charlatan dentist visits the mining camp and successfully treats the locals, she urges her son to apprentice with him. This establishes several themes. We see how easy it is to influence McTeague; we see his indifference to right and wrong (he’s learning to be a crook after all, and knows it). We see that money is a powerful lure. But we’re also introduced to Greed’s absurdist tone, and the unsettling effect it leaves us with. The idea of a charlatan dentist is kind of silly; that a supposed dullard could learn his skills (in dentistry or fraud) seems even sillier. But we’re asked to accept it, and so we see McTeague riding off in the dentist’s buggy, bound for San Francisco, while his mother waves goodbye, chewing her handkerchief with worry. Well, not chewing it so much as eating it, wide-eyed. There’s something wrong with that woman. She’s a doting mother, but she creeps us out.

We jump ahead to McTeague’s successful—and illegal—dental practice in San Fran. He’s unmarried, but has a few bar-buddies downtown and a sweating dandy of a best friend named Marcus (Jean Hersholt). Marcus brings in his new girlfriend, Trina, for dental work. McTeague is smitten. Marcus leaves, and McTeague puts the bland-faced Trina under, wrapping her head in towels so she looks like a nun. He kisses her. The scene is uncomfortable. Soon they’re dating. 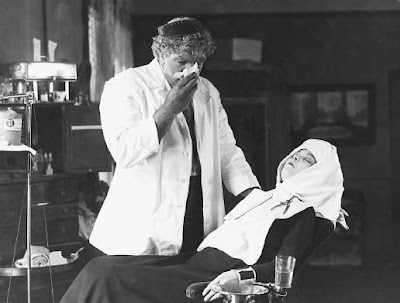 On one of those dates, McTeague and Trina wander to the sea shore and sit on a sewer, where he serenades her with “Nearer My God to Thee” on a concertina. It starts to storm. They find shelter in the crevice of a public building and possibly, McTeague rapes Trina. She seems very shaken—she also wants him to come by tomorrow.

McTeague proposes and Trina seems none too thrilled about it. The night before the wedding, she wins $5000. They marry in front of her hideous relatives and the glowering Marcus, who realizes the cash windfall he could have had. A funeral procession passes the house. Later they banquet—the most disgusting thing I’ve ever seen in a silent film—with Trina’s family gorging on barely prepared animal parts. Her father sucks the brains out of a sheep skull. It’s worthy of Tobe Hooper, which is something I never thought I’d write on this blog. 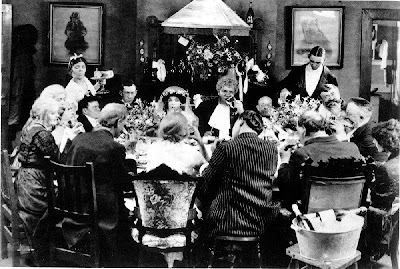 The $5000 is a curse, or at least it seems that way. It embitters Marcus, who vows revenge on McTeague; it unhinges Trina, who becomes a pathological cheapskate willing to do without basic necessities to keep it unspent. The only one unphased by it is McTeague, who makes a good living as a fake dentist.

Actually, the money isn’t the issue at all. It’s controlling the money that matters. For Trina, the $5000 is a possession McTeague cannot take from her. It replaces her virginity, which she was horrified to lose. For puny Marcus, it represents power. And when the dentistry officials finally catch up with McTeague and put an end to his livelihood, that money represents freedom—his dreamed-of freedom from Trina, who descends quickly into mental illness. She refuses to let him touch the five grand, even as they sink into humiliating poverty. He becomes a shiftless drunk and starts beating her. Eventually, he leaves her altogether. 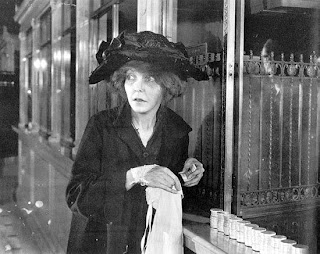 What a gruesome, awful couple they make. It’s impossible to feel for them; at best, you can pity them, and never both at the same time. I found pity for McTeague when Trina’s mania and denigrations reached their height, but lost it when he began assaulting her. I found pity for Trina when, as an abandoned wife, she found a lonely night-job as a scrubwoman in a schoolhouse, and McTeague returned, determined to get that $5000 at any cost.

Greed’s final act puts McTeague on the run, stumbling his way into Death Valley with a posse—and Marcus—behind him. Von Stroheim shot these scenes in the Mojave Desert, and they make for a poetic conclusion. Stripped of everything: job, marriage, social standing, even food and water; lost in a wasteland synonymous with human annihilation, McTeague still drags his bag of gold, and still someone pursues him for it.

I hope I haven’t turned you off Greed. It looks great, even if none of the actors do. It’s a finely crafted film that says real things, sparing us platitudes despite its moralistic surface. But if you watch a lot of silent films, Greed will get to you. It will embody your expectations, then turn them rabid. Pitts, to me, is a degraded Lillian Gish; Gowland looks like Fatty Arbuckle if he skinned Harpo Marx and wore his hide. Von Stroheim’s long studies of their faces—the kind of shot that gives us such beautiful glimpses of people and places in other silent films—here gives us something contemptible and even sick. This makes for bad melodrama. But it makes great horror, and that’s my definition of Greed.

Where to find Greed:
Greed is available on DVD, but I saw it at Toronto’s Bell Lightbox, accompanied by the instrumental post-rock band, Do Make Say Think. Kudos to them for mixing Noise with more traditional arrangements to keep us off-balance. I especially liked the background ‘music’ used to accompany McTeague in his dentist’s office. It’s the sound of wind rushing through a grate. Ominous, empty. Just like him.
Posted by Chris Edwards at 1:28 PM