In 1956, Cecil B. De Mille filmed The Ten Commandments and established Charlton Heston as cinema’s definitive Moses. He’s an attractive figure even today: Tall, broad-shouldered, stoic; his every phrase authoritative because every one of them carries the weight of Scripture and he knows it. Decked in robes, arms outstretched, one hand holding a staff, the other an open palm—this is a Moses we can get behind.


Heston wasn’t the screen’s first Moses, though. He wasn’t even De Mille’s first. Years before, the director gave us a very different Ten Commandments with a very different Moses—a silent-era Moses, wild-eyed, ferocious, and unkempt. This first film doesn’t stop to ask where Moses (Theodore Roberts) came from, or remind us of his relationship to Pharaoh, here depicted as a lovely, almost porcelain figure with eyes fixed on the distance. This Moses is an adult, already a leader; a man who, as the film opens, has already leveled nine of the ten plagues upon the Egyptians, apparently to no effect. His final plague, which he promises without remorse, takes Pharaoh’s son along with the first-born of every other Egyptian. Pharaoh lets his people go. The Jews are desert-bound before The Ten Commandments reaches the 20-minute mark. 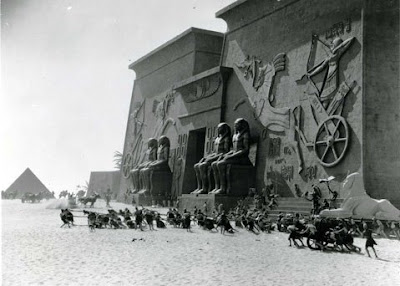 The first half of The Ten Commandments is all spectacle, almost relentlessly so. The walls of De Mille’s Egyptian city are high and thick and looming; his crowds are hundreds-strong and his desert (actually California’s Nipomo Dunes) adds a vastness to the Israelite’s journey that no matte painting ever could. His intertitles are a mix of Biblical quotes and pronouncements that sound vaguely biblical, all in a font reminiscent of Hebrew script. They are prescriptive, in a way that builds anticipation for the sights to come: “And the pillar of fire went from before their face and stood behind them,” for example, and then a wall of fire indeed rises between the Egyptians and the fleeing Israelites. Other sights amaze with their sheer weirdness and scale. De Mille’s first parting of the Red Sea looks like a tiny crowd marching between two giant, quivering walls of Jell-O (which is more or less what it was). The veneration of the golden calf is a sex party terminating in a massacre. And Moses atop Mount Sinai beats it all: Here the voice of God is depicted through ten huge explosions in the sky; after each fireball, the words of a commandment. Imagine “Thou shalt not make unto thee any graven image” hovering in glittering, star-spangled letters above your head. Moses, clinging to the cliff face, looking like a deranged Santa Claus, hacks God’s Word into the rock.

There’s a Vegas-feel to this sermon, but De Mille was always a showman. And because of that, The Ten Commandments is one of the quickest-moving, best-looking silent epics around today. If it lacks the succulence and artistry of something D.W Griffith would have produced, so too does it have the vigor and magic that Griffith too often ignored in favour of more preaching. The first half of The Ten Commandments is a film modern movie goers can enjoy without resorting to sympathy. Which makes things doubly interesting when, at about the hour-mark, it becomes a totally different flick.

From the remnants of the Golden Calf and the strewn of bodies of its worshippers we fade, suddenly, to a home in modern America. A little old lady closes her massive bible with solemnity, her daily story done. To one side of her sits her son, the stern young carpenter John McTavish (Richard Dix); to the other side her other son, Dan (Rod La Rocque), whose occupation isn’t clear. This little family, plus a pretty drifter named Mary whom Dan will find and eventually wed, form the nucleus of a modern parable: the second half of The Ten Commandments. 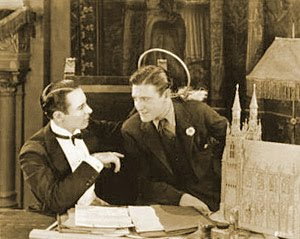 De Mille redraws his lines of conflict clear and quick. Dan is a charming rogue; a cocky atheist who thumbs his nose at his mother’s rigid faith, to her disgust. He sees the Ten Commandments as a brake on ambition; he encourages his stoic brother to do the same, but John prefers hard work to clever angles, and stands firm. John’s weakness is Mary (Leatrice Joy), whom he loves despite her party-girl philosophy, and whom he loses to his more charismatic brother. With Mary by his side, Dan makes a swift but crooked rise to the top, becoming the city’s most sought-after contractor; even landing a contract to build a cathedral. He thinks nothing of building his house of God from a lean mix: one of cement to twelve of sand and rock—the film calls it ‘rotten concrete.’

Dan must fall; we know it. But to the credit of the actors, and screenwriter Jeanie Macpherson, The Ten Commandments never devolves into the preachy morality play it could have been—after the borderline-action film that formed its first half, such a drop in tone would’ve been devastating. La Rocque’s Dan is flawed but likeable; we learn who he is not through a set of intertitles condemning the man, but through Mary’s looks—she falls for him immediately—and through John, who can’t help but grin even when he disapproves of Dan’s boldness. Yes, things get heavy later, but these three people love one another, and that love precedes all judgment. 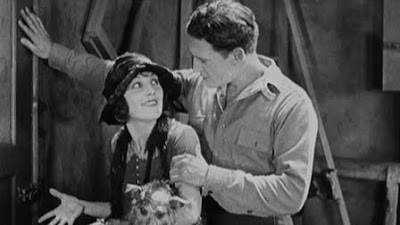 Dan’s villainy is also tempered by Mother McTavish (Edythe Chapman), who’s presented as a decent but overpious prude with no sense of fun. John chides her more than once about her use of Scripture as a weapon: “there’s nothing anywhere in that Book against having a little wholesome fun on a Sunday,” he declares, after she smashes a jazz record. Would Dan have rebelled if his mother hadn’t made God something to fear, rather than love? The movie insists that we ask this, even as Dan’s cathedral, and wider world, collapse around him.

It wouldn’t be De Mille without a little more over-the-top. Recalling the venality of the Golden Calf sequence in Part One, Part Two introduces us to Sally Lung (Nita Naldi), a half-Chinese, half-French intoxicant who emerges from a bale of jute en route through a leper colony. A Theda Bara-type, Sally seems more comedic than sexy today, but at least she looks convincingly mixed-race. She’s also the centerpiece for one of De Mille’s best shots, involving a torn curtain and several spoilers.

The Ten Commandments is really two films, either of which could stand alone and be hailed. That they’re placed together begs a question: If a healthy faith is one balancing reverence with good humour; piety with practicality; honesty with compromise, then what of De Mille’s Moses in Part One? Is this Moses a man loved or feared by his people? He’s so intractable; so explosive-tempered and inflexible. He calls down such a wrath upon them. Are they so hopeless that they must die for their fear? Maybe so. But maybe he’d have smashed a jazz record, if he'd heard one.