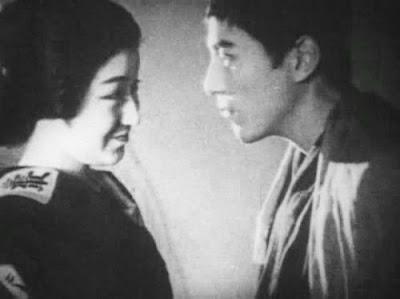 The train is about to leave, and the fleeing couple must be on it. Their benefactor presses money into their hands. “Promise me,” she says. “Promise me you’ll always stay together, and that you’ll always be happy.” All she wants is this guarantee.

Given the amount, and their circumstances, it’s the only payback the woman could expect and yet, it’s something the couple could never commit to with certainty. They’re young, and scared, and only human—who is this person who asks the impossible of them? She is a woman of many gifts, for whom the future has never been terrifying, but always the next beat in a continuing rhythm of success. She is Taki no Shiraito, the most popular performer in her travelling troupe; the most talented, the most beautiful, the most sought. And at 24, at the height of her fame, she’s the most generous, too.

The desperate elopers—performers themselves—weren’t the first to have Shiraito’s help. Two years before, strolling the countryside on a moonlit night, she found her first beneficiary: a shadow-man curled sleeping on a bridge. When the moon and clouds parted she saw his face, and knew it. He was Kinya Murakoshi, the handsome young carriage driver who saved her life three days before. He was unaware of who she was, despite her fame, and never asked, despite her looks. He’d disappeared before she could thank him. She’d thought of nothing but him since.

Now here he was, wretched, having lost his job and home and hopes. He wanted to be a lawyer, but had no money to pay for schooling, whereas Shiraito had money to spare. Every night the crowds flocked to her show, where she stood onstage like a magnificent queen, holding cups and paddles from which spouts of water jetted vertically to the ceiling of the tent. She made a dance of it; erotic and opulent, she commanded the water ’til it seemed to spring from her bare hands. Shiraito made the impossible possible and the audience loved it, and loved her, and made her rich, and she would save this poor man now. Kinya was aghast; he could only promise to repay her, literally and through his hard work. But she smiled and asked that he love her instead. That would be her compensation. One day he would complete his studies, and then she would leave the troupe and be with him. He made no such guarantee, but he did take the money, and continued to take it over the next two years of hard study in far-off Tokyo.

To us, Shiraito’s gift seems like an investment, the meat of a contract, but she’s not that cold. Like many who’ve found success early in life, she overestimates her control of events and people. Takako Irie plays her as coy and confident, whether balancing her mighty vertical waterspouts before the crowds or absorbing us through one of director Kenji Mizoguchi’s many intimate close-ups, where she tilts her head and grins without a hint of submission. But relationships are complicated. And while Shiraito can cut a deal as well as she can control the straight lines of water in her act, she’s less adept at managing the human relationships that compose such arrangements—the diagonals, tilting forward and backward uncertainly from their points of strength. And as you watch The Water Magician, you start to notice those diagonal lines more and more.

That tilt of Sharaito’s head. Kinya’s bow as he takes her money, drawing our eyes downward to him. Two rapists, leaning toward one another as they collude. Then their victim, one half of the fleeing couple, bowing with her husband beneath Shiraito’s generous face. Shiraito, standing beneath a judge when things go wrong, then beneath Kinya, now a lawyer, when they’ve gotten much worse. And finally, Mizoguchi’s camera, shooting scene after scene not only from above, but also from a three-quarter angle, setting everything off-balance. Always are we made to feel the the instability, the impermanence of human relationships; a bit of wisdom all the characters but Shiraito have learned. No wonder they all obsess over money. Kinya (Tokihiko Okada) certainly does, which is why he’s so severe, taking so little joy in the unearned, fawning attention of a beautiful woman. He lost his family, his job, and his future—salvaging the last only due to luck—and so he cannot relax. All he can do is work hard, becoming the great man he promised his benefactor he would be. He took the money from a woman who wanted love in exchange, but he never promised her that. He only promised that he would do right by her, and that needn’t be the same thing. 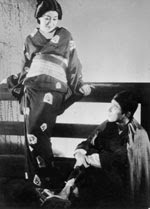 But after twists and turns, slopes and angles, the now-esteemed lawyer happens upon a pitiful site: Shiraito, depressed and alone, sitting on a flat jail-cell floor with thick bars, vertical and solid, standing between them. She’s on trial for her life, the result of a crime committed when the winter came, and the crowds went away, and she grew desperate to keep paying Kinya’s bills. ‘Maybe she’s innocent,’ Kinya thinks. ‘Or maybe I should take her place, for I’m as guilty, in my own way, as she who thrust the knife.’ 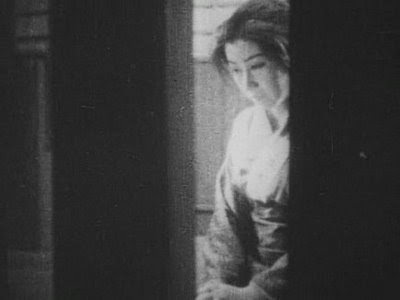 Cutting a deal can be easy. Meeting its terms, much harder. But by the end of The Water Magician, both Shiraito and Kinya must come to terms with a more profound issue. They must ask themselves whether it is enough to hold up your own end of a bargain when the other party may yet suffer for it. The answer is not simple, but it does bring to mind one more piece of wisdom: Never do business with someone you love. 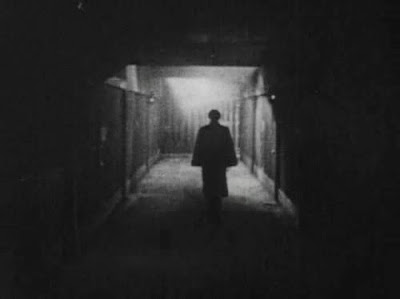 Where to find The Water Magician:
I attended a screening of The Water Magician at Toronto’s Japanese Canadian Cultural Centre, part of the JCCC’s second annual Shinsedai Cinema Festival. Live accompaniment was provided by Toronto-based electro-acoustic (they call it ‘krautrock-techno’) musicians, Vowls. Vowls have a memorable sound; their list of instruments includes drums, guitar, melodica, hummingbird, sitar, ebow, moogerfooger, percussion, water, circuit-bent electronics, and a glockenspiel.
Posted by Chris Edwards at 10:26 AM