Well it IS Canada day... 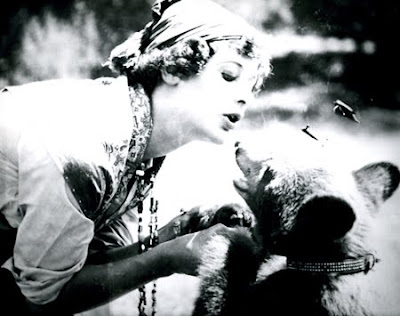 “Canadian law knows no excuse for killing. I must take your father to the post.”
Damn right! Nobody messes with Canadian law, especially in the thick of rural Quebec; and never when it’s Captain Rydal of the RCMP slapping the cuffs on you. Rydal’s got his man, alright—a backwoods Quebecois who’s just stabbed a drifter to death on his own front stoop. Now, he only did that because the drifter’s pal was trying to rape his daughter, but that’s up to Canadian law to sort out, so off he must go. And off he does go—right off a cliff, because the would-be rapist is Rydal, who’s ‘captain’ by virtue of running a ship, and only wears a Mountie’s uniform because he had the real Mountie shot. When you live in the woods, the only people you can trust are the animals.
Rydal (Wellington Plater) is the star villain in Back to God’s Country, a Canadian-made adventure flick brimming with scumbags. He’s a weathered sneak with a hungry look, and the camera ogles him almost as much as he ogles Delores (Nell Shipman), the backwoodsman’s daughter and only living relative. Delores is delicious, as young women in the woods always seem to be, and oblivious to her charms—or at least, to the ranks of her admirers, like Rydal, who enjoys her nude swim in the forest rapids even more than I did. 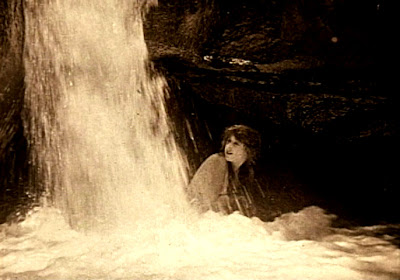 Things had been going great for Delores. After years of virginal idyll, sharing a log cabin with her dad and the various beasts and birds who tromped and flew through her front door, Delores was visited by Peter (Wheeler Oakman), a naturalist and writer in search of material. Love came instantly and easily to the couple, as it often does in silent films. But Peter eventually moved on, and Rydal, through painful coincidence, moved in. Only by the sheerest luck does Delores survive that ordeal. Rydal escapes, and Delores weds Peter, moves to Montreal, and starts anew as an urbanite.

Whatever Peter’s writing, it must be popular, because his house is a lot bigger than mine. For Delores though, it might as well be a prison cell—she aches for the wild, where she could play with a family of bears by the crick-side or laugh as a friendly porcupine ambled into her bed for a cuddle. You’d think Peter would be a step up from that, but Delores makes him promise to return them to the forest for good, and he agrees to do it. Just as soon as they return from their government-sponsored sailing trip to the Arctic. Guess who their ship’s captain is? 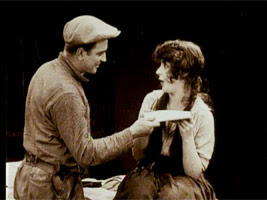 While you ponder that, let me tell you about the film’s sort-of subplot. Forty years earlier, a Chinese prospector arrived at a snowbound trading post with his dog, Tao the Great Dane. The prospector was not welcome, and did not survive. Tao, however, must have thrived, because generations later, his ferocious bloodline produced Wapi the Killer, a dog who not only hates every man he’s ever met, but also every other dog, and every woman, too, though the only women he’s ever met are the Inuit prostitutes who visit his master’s cabin. Tourists are rare in Wapi’s frozen home, which is a 200-mile dog-sled trek from the nearest settlement, Fort Confidence.

Wapi is ready to chew some ass, and we’re ready to see him chew it. And he’ll get the chance, because it turns out that yes, Rydal was at the helm of the vessel carrying Delores and Peter northward, and now, unsurprisingly, Peter is near death. When the ship arrives at Wapi’s outpost, then freezes in place for the winter, we have our stage perfectly set for the showdown between bestial human and heroic beast.

Any film that makes a dog its hero is camp. Any film that lets us in on the dog’s feelings at the time is doubly so. Wapi, an irredeemable brute his whole life, turns buttercup when touched by Delores; he becomes her loyal protector ever after, and we know exactly how sincere he is, because we’re treated to lingering shots of the pondering dog, interspersed with flashbacks of his intimacy with Delores. Don’t take that wrong—Delores is Peter’s girl all the way—but when Back to God’s Country reaches its climactic dog sled race across the barrens, and Wapi breaks free of his chain to defend Delores, I think we can be sure that, if Peter wasn’t around, the dog would perform as required. The intertitles almost gush:

“Fighting at last the greatest of all his fights—for a woman.”

What a great dog. Maybe Wapi deserved a movie better than Back to God’s Country, but the movie sure is glad to have him. And loyalty is something every dog can appreciate.

Where to find Back to God’s Country:
Milestone offers Back to God’s Country on DVD, packaged with another of Nell Shipman’s early Canadian efforts, the comedy-western, Something New (1921). The film was restored from a pair of tinted nitrate prints, through the efforts of the National Archives of Canada.
Posted by Chris Edwards at 11:36 PM