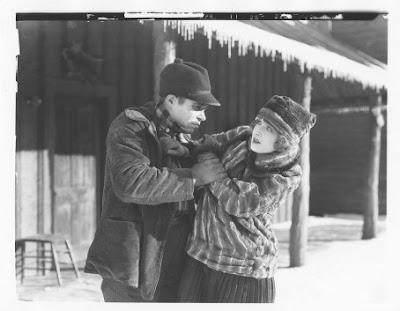 The White Desert devolves me to one of those studio-paid ultra-shills: the men and women who tell you about The Smash Hit of the Summer! before the movie’s drawn a dime; the writers of screaming poster text; the names stuck beneath hyperbole. That’s how this movie makes me feel.

This doesn’t happen to me much. Especially with silent films, which rarely blow me away with pure spectacle. Even gargantuans like Metropolis and Intolerance—celluloid records of unparalleled set-design—elicit more of a CFO’s nod than a wide-eyed child’s grin from me. I’m impressed by the sights in those films; impressed by the labour they entailed, the money they cost, and the beauty they achieve. But I don’t believe them. They look like sets. And today, a talented designer with mouse in-hand can eclipse them, and do it in colour, too.

The White Desert, though—this one holds its own. Add a few hues and audible quips and you could still place this disaster flick among the CGI blockbusters of modern summer. Pretty girl? Check. Pair of lads, dueling for her heart? Check. Comic relief? Checkaroonie. Massive natural calamity, provoked by corporate greed and the hubris of Man, imperiling everyone onscreen? Check, and big time.

The disaster, in this case, is an avalanche. The victims are the workmen of a mountainside mining camp, their wives, and children. The cause is an ever more urgent drive to bore through the side of the peak. The man behind the push is John Keith (Robert Frazer), an ambitious engineer who believes he can break a company record. Opposing him is his friend, Barry Houston (Pat O’Malley), the crew supervisor whose experience tells him they are risking too much. Barry is also John’s foe in matters of love—for both pursue Robinette MacFarlane, the tasty, tarty only daughter of company owner, Saul (Frank Currier).

Robinette is played by Claire Windsor, doing her best to channel Clara Bow. She’s a sexually irresistible ball of spunk who throws her own punches and tells Barry to stick it when he says a mining camp’s too dangerous for girls. Barry, Robinette and the rest will soon pine for the days when sexual frustration was their biggest problem. But for now, crossed signals are due to bad body language, not downed telegraph wires. 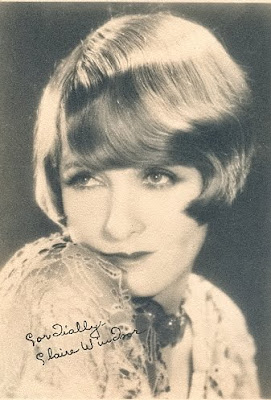 Windsor’s vixen, a light-comic creation, won’t matter so much once fun times cease at the camp. When John’s dynamite charges disturb one snowy cliff too many, burying the camp and cutting off its residents from the outside world, Robinette must get dead-serious along with everyone else. And this is a major shift in the film, because up to that point, Windsor, along with perennial comic relief, Snitz Edwards, and Currier’s dunderhead-dad, made The White Desert all comedy. Edwards pulls cheap but timeless laughs as the tiny man with a wife of superior tonnage, thrilled at the prospect of her leaving for the winter. Saul is an unusually kindly company owner with a tendency to be underneath falling objects in his own home—a nice piece of foreshadowing. And Windsor drifts delicately into farce, managing her two beaus so expertly that she can even hold both their hands at once under the same table cloth, one on each side.

But all this goes when the snow starts rolling. Then life becomes a game of basic survival for everyone on the mountainside, facing starvation far, far away from any major settlement. The avalanche is followed by serious whiteout conditions that block the only supply train that can help them. Assuming, of course, they can even send a message to call for it.

We never doubt the seriousness of their situation, because the avalanche itself, portrayed with miniatures, represents some of the finest special effects I’ve ever seen in a silent film. The snow smashes over buildings in seamless scenes of frightening realism. It scares us half to death, unlike so many silent-era stagey effects that send audiences into chuckle-fits. We know these folks are in trouble.

And indeed, the half-buried camp remains full of still-living people with minimal food; their collective plight embodied by a crying infant needing milk. The baby’s father is among those who trek out from the site in search of a functional telegraph wire. Both Barry and the guilt-ridden John make journeys too; John succeeds in making the call, nearly dying of hypothermia in the process. But the train-tracks are buried deep. Can the locomotive make it in time? 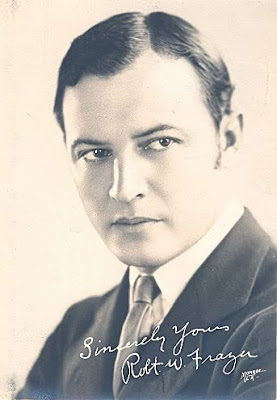 What follows is one of the most potent portrayals of willpower I’ve seen in any movie, silent or otherwise. As the camp withers from cold, nerves, and paranoia, the engineers in the nearest town (which is not nearby at all) vow to push their way through the drifts. They do this with picks and shovels, working madly ahead of the train’s enormous snow plough. The plough itself is the ultimate showpiece: an enormous fan attached to the train’s foremost car, spinning its blades and spraying great arcs of snow to either side, all day and all night. Reginald Barker’s camera keeps us close to the great machine; so much so that I could almost feel it laboring; clearing a path, freeing the train to move ahead, foot by foot, toward a stricken camp that will soon be populated with the dead. 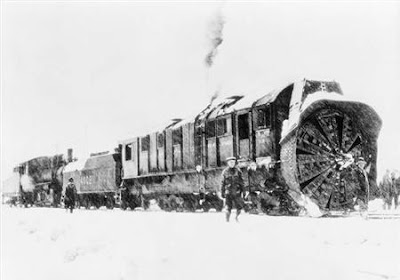 C’mon! Wouldn’t you pay to see a movie like this? I did. I saw it live, and yes, I loved it. The White Desert is a pure thrill-ride; a knockout. Fun for the whole family. A non-stop adrenaline rush… get the idea? Go find it, go watch it. You won’t be disappointed.

Where to find The White Desert:
I saw The White Desert at Cinefest, in Syracuse, NY. Piano accompaniment was provided by Dr. Philip Carli.
Posted by Chris Edwards at 6:11 PM