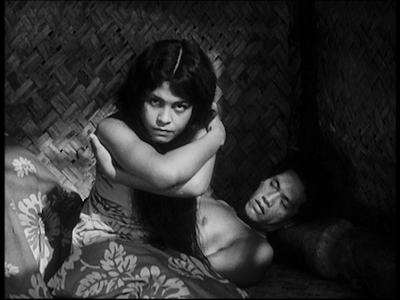 In Tahitian, a tabu is a designation of sacredness. Anything—object, place, or person—can be declared tabu, and it’s a serious matter. Break a tabu and things will go badly for you. Try to escape the consequences, and they will follow you. So take a hint and stay within your bounds.

Tabu, director F.W. Murnau’s final film, is about a young man who prefers death to following these rules, at least in one, very special case. He is Matahi, a Tahitian diver with an otherwise perfect life. Murnau and his partial collaborator, Robert Flaherty, show us Matahi frolicking through his Eden of the South Seas, tanned from an endless sun, scaling trees and splashing into a pool filled with nude beauties, many of whom like the happy, muscled islander with the triangular back.
In all his upbeat, frivolous days, Matahi has only once seen a thing so majestic that he must take it seriously: Reni (Anne Chevalier). Matahi loves, loves, loves the gorgeous Reni, and she loves him too. But soon there’s a problem. Before they can so much as make out, Reni is declared tabu by the higher-ups in an adjacent island. She is now officially, unequivocally, and perpetually, off-limits to Matahi, through no fault of his own.

Matahi has never known want, certainly never been denied something that mattered to him as much as Reni, and doesn’t appreciate his life being ruined as a side-effect of an arbitrary ruling. The ruling isn’t arbitrary, though—Reni has been selected for a religious function based on her various attributes, beauty being one of them, and the tabu is a means of ensuring her purity. That Reni’s new role may serve a key social function means nothing to Matahi; he kidnaps her. She doesn’t resist him. 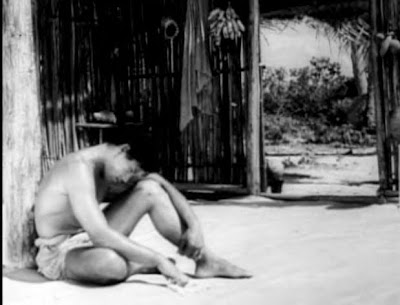 The second half of Tabu concerns Matahi and Reni’s fugitive life on a nearby island, where colonial French authorities, Chinese merchants and Tahitian islanders intermix in a soup of cultures and commerce. Here Murnau fills his frame with the bustle of the commercial port, but pace of the film is really no different than before, since life on the couple’s home island was also energetic and action-packed. What’s new is the dread they carry—the awareness of the tabu they have breached and ever-present threat of its embodied curse: Hitu, a stoic older islander who must return Reni to her place or forfeit his own life instead.

Hitu cannot be bought, like the French authorities; he can’t be bargained with, like the merchants; he can only be fled, and not forever. Reni seems to understand this better than Matahi, for whom no situation is hopeless so long as he keeps trying. His solution is to buy passage on a steamship headed somewhere far away—a pricey trip they cannot afford. How can they raise such cash? Matahi decides to risk his life by diving down to a particularly rich pearl bed, retrieving its treasures, and selling them for big money. But the reason the pearl bed is rich is because no one dives there. And no one dives there because it is patrolled by a deadly shark. An animal so lethal that the French authorities have placed a floating buoy over the spot, with a sign, saying ‘Tabu.’

There’s no question that Matahi will risk his life for the pearls. He is a being of pure impulse, over whom a floating stop-sign can have no power. Reni, though, is clearly troubled by the conflict between her feelings and her duty. She wonders if following her heart means a life on the run, forever. She also knows that Matahi’s in more danger than she is. 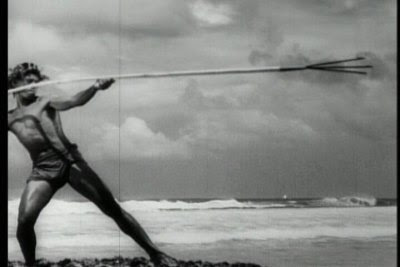 I can relay most of this to you based on the actors’ faces and body language alone. Tabu has almost no intertitles; of the few it does have, most are handwritten letters, conveying essential details (like the shark) through the correspondences of French officials. Matahi, Reni and Hitu never say a word, at least that we can understand. In true silent films, we see the characters speak, but only crucial dialogue is transcribed. Here, it seems no piece of dialogue is that crucial.

A dialogue-free film can work brilliantly. Murnau proved it himself with The Last Laugh (1924), possibly his greatest work. But Tabu, despite its universal characters and universal situation, sets us too far back from Matahi and Reni to truly sympathize. Reni, the more level-headed and mature of the pair, must have had some very hesitant discussions with Matahi during their exile, yet we get none of it. The Tahitian’s written language, through which the original tabu proclamation is delivered, immediately fades; replaced onscreen by solemn and decorative English words. Even the details of Tahitian culture, and the particulars of Matahi and Reni’s dilemma, are explained to us not by the natives, but through the letters French captains and officers write to one another. 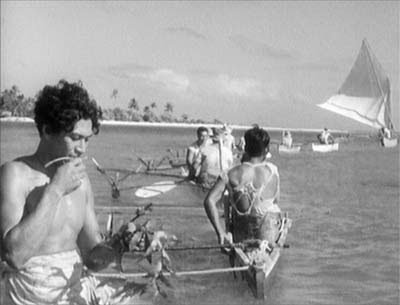 Matahi and Reni are indeed like us, but does that free us to ignore every word they say? I don’t think so. Despite Murnau’s admirable effort to portray the Tahitians in non-stereotypical fashion, even his two best-developed characters remain, in some sense, the Other; presented to us through European eyes and European correspondences. I don’t need Matahi and Reni to sound like me. I don’t need them deciphered. I just need them to be interesting, and these two aren’t.

Where to find Tabu:
Tabu: A Story of the South Seas is available on DVD from Image Entertainment.

You can also read my posts on F.W. Murnau's underappreciated City Girl, and highly appreciated Nosferatu.
Posted by Chris Edwards at 10:36 AM