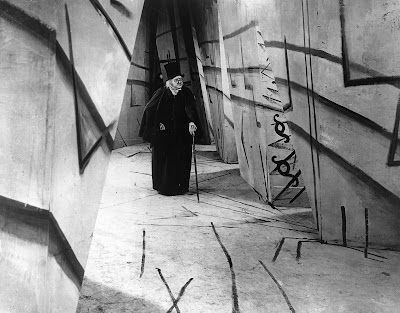 The Cabinet of Dr. Caligari isn’t scary. Silent horrors rarely are. But it is incomparably weird; it diffuses strangeness like a bloom does pollen. It clings to you. Watch this film, then take a walk. Why are the buildings you pass all so vertical? Ask yourself how that makes you feel. Before long, you’ll be scaring yourself.

Verticality is rare in Cabinet; its buildings rest at steep angles, as though they’re leaning. Its streets wind and weave in organic fashion. And the denizens of the town of Hostenwall skulk and shuffle along, as bent as their buildings. These diagonal surroundings give the impression of a town constantly in motion, in flux—a population in a state of change. If we derive peace of mind from the horizontal and vertical lines that dominate our architecture, do the people of this world derive instability from what dominates theirs?

This is not a central concern for any of them, even Cabinet’s anxious hero, Francis (Friedrich Feher). Francis is plenty scared—his best friend has been murdered and his would-be wife, Jane Olsen (Lil Dagover), seems destined for the same end—but his world is normal to him. It’s just a matter of finding the serial killer and saving the day, which is what heroes like Francis always do. To accomplish this, Francis enlists the Hostenwall police, who crouch atop tall, curved stools, doing paperwork. They’ve already nabbed one suspected killer, a house-thief, so the investigation isn’t top-of-mind. But if they were more astute, they might have paid a visit to Dr. Caligari’s tent.

The toad-like Caligari (Werner Krauss) arrived in town not long ago, with a travelling circus. He soon filled his tent with curious spectators, crowding the stage to have a look at Cesare, his somnambulist (sleepwalker). Cesare lives in an upright wooden box (it would be a coffin if he were dead), and wakes only to give prophecies. His first prophecy was that Francis’ friend would die.

Cesare is one of German actor Conrad Veidt’s most famous early roles. Here he resembles Rudolf Nureyev after a month underground—pasty white, eyes heavily ringed with black, and a long, angular frame. He’s all emotion. When he wakes, his face seems overwhelmed by the enormity of life, as though he were newly born. When he’s enraged, it becomes a sadistic mask. Veidt makes sure his character is just as strange and unsettling as the world around him, arching and skulking through scenes to ensure a minimum of straight lines. 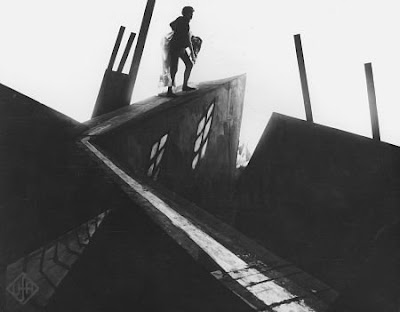 Except once. That would be when Jane, daughter of the town’s doctor, comes looking for her dad on the circus grounds. Caligari invites Jane into his tent, and there we have a shot unique to the film: on the left, Caligari and Cesare (standing upright in his upright cabinet); on the right, Jane, separated from them by the left edge of the cabinet, which severs the frame: 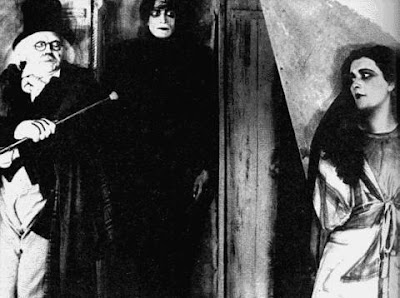 There’s stability in this sequence—a firmness and sobriety to the moment, as compared to the goofiness underlying even grim events back in Hostenwall. It is here that Cesare sets eyes on the first human he’d be reluctant to murder if asked. This meeting will have grave consequences for Jane, too; for her association with Cesare will permanently alter her mental state. It may even amount to an end-game for Caligari. Absent, notably, is the addled Francis. He would seem out of place in a scene so well-balanced. Maybe we should wonder why?

It’s appropriate, too, that the scene takes place in a circus. Think about it—a city of tents, propped up by poles; coverings of fabric that billow in the wind, pointed tops that sag—these tents often lean, but of all the architecture in the film, they alone look natural. And by ‘natural,’ I mean the way they look in our world. The circus is a bastion of normalcy in Cabinet. Which makes you think, if you care to, what kind of world you get when a circus is the most stable place.

You will have time to do this thinking. Director Robert Wiene holds the camera for long takes, usually so Francis can expound on the latest horrible happening to some dozy authority figure, then stand there in grief and apoplexy while deciding what to do next. This allows you to focus on Cabinet’s ever-weirder Expressionist set design, which is certainly the point. However, it also slows the film to a butt-fidgeting pace, and reminds us how thinly spread Cabinet’s plot really is. 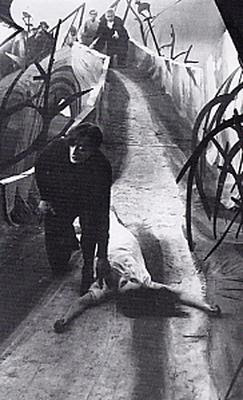 Could a milquetoast like Francis really catch a serial killer? Probably not, but he’s helped along by a series of deux ex machina discoveries made in the local asylum. Caligari, you see, is the asylum director in disguise. And Francis will get his revenge on the cruel old man, institutionalizing Caligari himself and riding into the sunset with the beautiful Jane by his side. It all seems scripted by a fan of bad whodunits, but it’s all true. All of it!

Events—and ultimately, Francis himself—are too unlikely to be trusted. But if Francis is a crooked man from a crooked world, it bids us wonder how much we draw our own sense of the straight and narrow from a world built on right angles. Or worse: if Hostenwall’s writhing buildings are but a product of Francis’ mind, what do flag poles, Roman columns and great slabs of concrete like the World Trade Center reveal about us? Do we project our need for order that desperately? And if that need became too much, would we be able to tell?

Where to find The Cabinet of Dr. Caligari:
Das Kabinett des Doktor Caligari is widely available on DVD, in several restorations, though the quality of the prints varies. For a safe bet, try Kino International’s edition.

As for me, I got to see the film live. It was screened at Tranzac, in Toronto, and accompanied by Andrew Downing’s seven-member chamber ensemble. Downing composed a new score for the film (replete with xylophone and bassoon), and kudos to him for remembering that Cabinet is, at heart, a pretty funny movie.
Posted by Chris Edwards at 11:16 AM