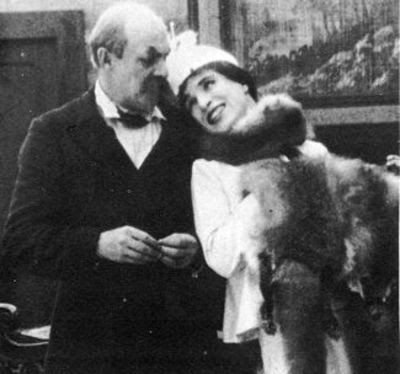 You think you know a guy. You follow his work, you admire him—you figure you can predict his every move. Then, one day, you catch a glimpse of what he used to be like. He was a cocky s.o.b., back in the day. He stole. He beat people up. And he dressed in womens’ clothes.

Well, I thought I knew Charles Chaplin, brother. I recognized that stutter-stepping little sneak; the one with a heart of gold, but not much spleen, and no sway with the ladies. But like another famous Charlie—Charlie Brown—this little icon wasn’t always so tame. Travel back, before the maudlin grace of Modern Times (1936) or The Circus (1928), beyond even the measured pace and ample budget of Payday (1922), and you’ll find a Tramp still unfurling himself from the Keystone cloak of violence, sex (and yes) unqualified laughs. In some ways, I like the Chaplin of 1915 best of all.

The Chaplin of 1915 had left Keystone Studios for the greater freedom and juicier contract offered by Essanay. In exchange for that phat paycheque, Essanay demanded 14 short comedies, which Chaplin delivered over the course of one year, before moving on once more. A Woman was his ninth, and one of my favourites. It’s an eye-opener all the way.

Chaplin stars as the Tramp, of course. His love interest is Edna, played by Chaplin’s frequent collaborator, Edna Purviance, looking heavier than she would in his later films. Edna’s parents, played by Charles Inslee and Marta Golden, have a rotten marriage that makes for a turbulent household. They’re also grotesques—he the moustachioed lecher and she the homely excuse for his lechery. The Tramp stumbles across this family at a park, shortly after Edna and Mama have fallen asleep and Papa has seized the chance to flirt with a passerby.

The Tramp gets involved in Papa’s affairs more or less by accident. After Papa runs off to buy his new ingénue a soda, Chaplin saunters past her bench and hooks the bottom of her skirt with his whangee cane. But if even we assume that was a slip, it doesn’t stop him from (a) earning a sly glance from her, rather than a shriek, and (b) following that cue to snatch a spot next to her on the bench. Sure, Papa still clobbers him when he gets back, but the Tramp’s unusually sure of himself beforehand.

We see why in the ensuing park sequences, as the Tramp runs into further conflicts with Papa, two drunks, and a cop. In each case, Chaplin gains the upper hand with a solid right, and by wielding his cane the way Bruce Lee might in a different kind of movie. It’s not that I found it strange for the Tramp to cause chaotic violence—it’s just that I rarely recall him causing it intentionally. Here, Chaplin doesn’t knock the cop into the pond by turning suddenly in one direction and smacking the cop with the back of the cane—rather, he subtly loops the crook around the law’s neck, then hurls him, judo-style, into the drink. 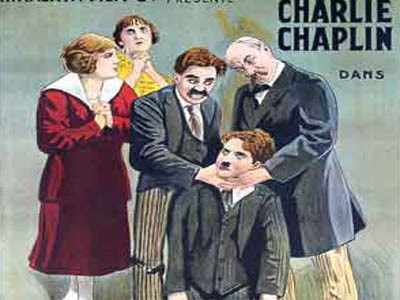 Things get stranger back at the family’s home. Papa, soaking wet, arrives later than his wife and daughter, who are treating the Tramp to a donut lunch in the kitchen. Brawls ensue, in which the Tramp again holds his own against Papa and one of his friends. With the older men temporarily cold, the Tramp escapes to the home’s upper floor wardrobe, where he finds one of Edna’s dresses. He’ll cross-dress his way past the old man, it seems like.

The illusion is likely to fail, and Edna knows, and we know it, too. See, not many women wear a black moustache. Edna, laughing, suggests the Tramp shave it off. Then they might get away with it.

Watching this, I racked my brain for another example of Chaplin in drag. I couldn’t think of even one, and Wikipedia confirms that it happened only two other times, both in Keystone features older than A Woman. And maybe there was a good reason for that, since Chaplin doesn’t make a convincing woman, at least in manner—certainly he’s nowhere near the physical mastery shown by Fatty Arbuckle in Coney Island (1917) or Buster Keaton in The Playhouse (1921). On the other hand, one of a Chaplin film’s great assets is its absolute adherence to character-logic, so perhaps Chaplin was deliberately playing the role badly, because the Tramp himself would have. I’m not sure.

Where neither Arbuckle nor Keaton can match him, though, is in the face. Chaplin lets the camera shoot him in tight—allowing a glamour-style close-up—and then we see he’s not garish at all. Chaplin was a pretty man. He had high cheekbones, fine features and a gleaming smile, and frankly, he makes a rather alluring woman. No wonder Papa heads straight for Edna’s ‘college chum,’ leading to a predictable, but well-choreographed, cat-and-mouse game.

I liked A Woman a lot. Its pacing is perfect; its physical comedy, particularly the first third, set in the park, is edgy and inventive. As in his later adventures (and again, much like Charles Schulz’s equally famous loser), this early Tramp is not afforded an easy, happy ending, but neither is he the victim of society he would be portrayed as being later on. This version, whether in drag or not, reminded me more of Harpo Marx’s silent clown. Marx, despite his soft look, wasn’t nice. He prodded and otherwise provoked people to action, then delighted himself by reacting to their anger. The more Chaplin’s Tramp resembles Marx, the less I recognize him. And, for the refreshing change that provides, I’m for it.

Where to find A Woman:
Sounds like a personal ad, doesn’t it? A Woman is found on Disc Two of Image Entertainment’s three-disc set, Chaplin’s Essanay Comedies.
Posted by Chris Edwards at 11:29 AM