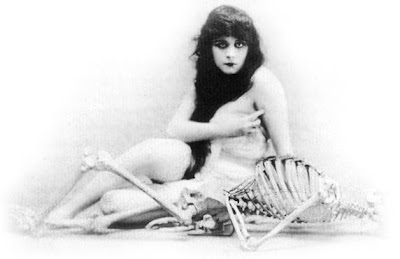 There’s a moment late in A Fool There Was when John Schuyler, former lawyer and U.S. diplomat, now a disgraced, debauched shell, crawls down the staircase of his home, headfirst toward the floor. At one point he stops, eyes round and haunted, and pushes his arm through the spindles of the banister, as though they were bars. Soon, we see ‘The Vampire’ (Theda Bara) looming over him; the woman who seduced him to leave his family and, as her name implies, sucked him dry. She looks ravishing as she sprinkles bits of flower upon him, but it is no gentle gesture—the moment the petals rest on his face, she blows them away.

I enjoyed this scene. In his final appearance as Schuyler, Edward Jose plays him not as one who’s lost everything and regrets it, but as a junkie with no further means of buying drugs. And Bara is allowed to be a sex symbol, rather than the crude symbol of sex she plays for most of the film. The Vampire’s interesting, as is Schuyler, and thank god A Fool There Was ends with them, rather than paying fealty one last, tiresome time to Schuyler’s nauseatingly righteous family.

It could have been a lot more interesting, given the qualities of these two. The Vampire is a vindictive sociopath; someone incapable of remorse or compassion, who evaluates the worth of a man based only on his ability to support her. Schuyler is the wealthy head of a large seaside estate, living with his wife (Mabel Frenyear), several servants and cherubic only-daughter. One day, when wife and child are out to play, they happen upon the Vampire and her latest meal-ticket. The wife turns her back completely to the Vampire and walks away (see it here, at about 4:20). The Vampire vows that the snob will pay for the snub.

Stealing, corrupting and destroying her husband is one way to do that. Bara’s Vamp manages to work her way onto the same Europe-bound steamship as Schuyler, and soon, they’re having an affair in Italy. Given Schuyler’s social position, the scandal reaches his wife, who’s waiting dutifully for him back in their staid paradise. Her choice, now, is whether to stick by her louse of a spouse, or divorce him. 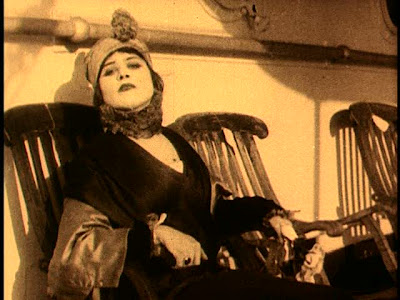 This would make great tension, if the film hadn’t already settled into its strict juxtaposition between Schuyler’s fall (first in Europe, then in America), and the idyll he’s left behind. Its binary structure depends on Mrs. Schuyler remaining in play, as a virtuous counterweight to Bara. She’s not going anywhere, we realize. And on, and on, goes the lecture.

A Fool There Was is so rigid that modern viewers are apt to rebel against it. When Frenyear turns her back on Bara, the film means us to see the depths of the Vampire’s vitriol, and the extremes to which she’ll go to settle a score. However, we’re more likely to focus on Mrs. Schuyler’s bigotry. Bara’s looks, it will be noted, are a blur of exoticisms—Arabic, Oriental, maybe Jewish; she lives in what looks like an opium den, waited upon by black and Chinese servants (the Schuylers only employ whites). When we first set eyes on her, she’s wearing a striking, diagonal-striped dress and an angular hat topped with a feather—and I’d submit that, based on look alone, most people today would choose her conversation over tea and dainties with the various unicoloured, high-society drones the film holds up as epitomes of virtue. Bara’s character, it turns out, is already a known quantity within Schuyler’s social circle, though certainly not part of it; when news of the affair reaches home, a gossip columnist refers to her as a ‘certain notorious woman of the vampire species,’ denying her even a biological link to the gentry class.

All this makes the Schuylers and their wealthy friends into an ugly lot, and the Vampire’s refusal to scurry around in shame before them shifts our sympathy, at least in part, to Bara. Besides, John Schuyler’s utter capitulation to her can mean only that she is—in modern terms—a total freak in bed. She’s bad, but she’s also liberated. 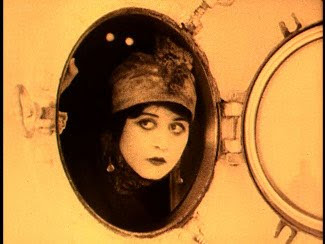 While A Fool There Was ends badly for Schuyler, I suspect its real lessons were directed to women. Notably, Mrs. Schuyler planned to join her husband on his trip to Europe, only staying behind when her sister required medical care. Had she boarded the ship, the Vampire might have been thwarted. Is Mrs. Schuyler the real fool, then, for taking her eyes off her man? The film suggests so, though her commitment to victimhood saves her in the end. She is, after all, freed of her husband without ever seeking a divorce. That’s a dream scenario for the perfect woman of 1915.

Where to find A Fool There Was:
Kino International distributes A Fool There Was on DVD. The disc includes the full text of Rudyard Kipling’s 1897 poem, The Vampire, upon which the movie (and an earlier play) were based, along with a 1915 review of the film and other supplements. Apropos of nothing, I have to commend Kino for designing one of the sexiest scene-selection screens ever... Bara looks better there than at any point in the film itself.
Posted by Chris Edwards at 11:59 AM