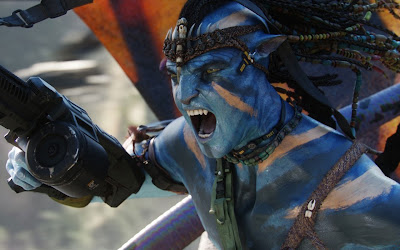 One of my rare forays into the sound-filled and modern. Spoilers follow.

Seeing Avatar is not easy. I twice failed to purchase a ticket to it, finally squeezing my backside into another sold-out Toronto theatre only yesterday afternoon. Had I shown up 20 minutes later, I probably would have been turned away again. This is a three-hour movie that, in Week Eight of its North American run, can still pack a house in a major city, at 3 p.m. on a Friday. That’s impressive. More impressive is how it can do this despite being an all-time low for big-budget Hollywood film-making. I can’t think of a movie that offended me more, and I’ve seen some trash. Just hear me out.

I didn’t set foot in that theatre expecting miracles. Three-hundred million dollars is a lot of scratch, and frankly, I’d be inclined to play it safe myself, if I’d written the film. So I wasn’t surprised by the expository dialogue, cribbed from every marine-themed action script 20th Century Fox ever turned down. I accepted the characters for what they were: rigid stereotypes, introduced as good or evil from the outset and never allowed to develop. People and events contorted and reversed themselves to propel James Cameron’s message and, it seemed, keep the audience awake. I stayed awake. My real concern, though—once I took my eyes off the floating mountains and the big red dragon with the two fins on its head—was the content of that message. While Cameron’s previous behemoth, Titanic (1997), boiled down to a simple love story, Avatar presumed to lecture. What was its point?

Here’s a link to the film’s Wikipedia page. I’m not much interested in recapping its fuzzy backstory—it’s enough to say that Sam Worthington’s paraplegic marine, Jake Sully, is shipped to a hostile jungle world, Pandora, where he must assist in the relocation, if not outright extermination, of a race of ten-foot, blue-skinned humanoids called the Na’vi. The Na’vi live in a giant tree, because they are one with nature, unlike the human invaders. Unfortunately, the Na’vi also make their home atop several rich deposits of ‘unobtainium’ (ha), which the humans seek to exploit. The blue people will not go quietly.

Cameron’s script does some mining of its own—collecting samples from several indigenous human cultures (and Ewoks), mashing them into colourless goo, adding blue dye and pouring it all through one big funnel to produce the willowy, wondrous Na’vi. How not to love them, as they wage guerrilla war against the helicopters, mechs, and machine-gun-bristling bulldozers that approach? Even better, the Na’vi employ only natural means to do battle: firing arrows dipped in poison, and riding flying lizards and six-legged horse-creatures, with whom the Na’vi can bio-chemically link, so as not to ‘break’ them as a human might. How rotten those humans look by comparison, rolling over the trees in their sludge-grey metal machines. Of course, our quality of life depends on such machines, but never mind.

Nevertheless, it’s possible to sympathize with a people and still disrespect them. An ethnologist watching the Na’vi could probably pick out references to North and South American Natives, Aborigines, Tibetans, Uyghurs, Palestinians, European Jews, Indians, Iraqis and several other groups, but he or she could never imagine anyone so lily-pure as these folks, anywhere in any world. They’re incontestably righteous, lacking serious inter-societal conflicts, self-doubt or cruelty. They’re also fit and beautiful (the logical conclusion of the supermodel body type, in fact), and remain so even into old age. This is fortunate for us, as viewers, since the Na’vi are barely clothed. 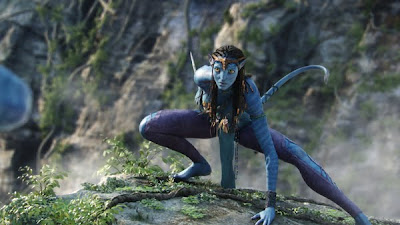 It surprised me to see Cameron, for all his broad-mindedness, still falling back on the myth of the ‘noble savage.’ The only difference between his view and the patronizing poets’ of colonial times is that he doesn’t consider the savages’ fate inevitable. And the irony of this position, at least for me, is that it makes the Na’vi less sympathetic. Despite the terrible suffering they endure, theirs is a fraudulent culture, too perfect to be believed.

They’re also stupid, at least when the script requires it. And it repeatedly does, for no Na’vi is allowed to be the hero of this story. That honour falls instead to Sully, who ‘becomes’ a Na’vi by transferring his mental self into a genetically engineered Na’vi body. The Na’vi then adopt him into their tribe, even though they’re aware he’s a fake, and know that members of their tribe have been murdered by humans already. Why, on earth or Pandora, would they allow Sully’s avatar to get so close? Cameron explains it away with another chestnut: Sully is ‘the chosen one’; a being of strong heart, indicated by bits of dandelion fluff landing on him in peculiar ways. And so this mighty culture, threatened with genocide, sets aside its better instincts altogether, due to a sign from the gods. I can think of no real group of people, ‘primitive’ or otherwise, who would act so foolishly.

Colonialism is a complicated problem; cultural and ecological chauvinism, even more so. So what solutions does Avatar truly provide? Our hero, Sully, begins the film as a self-described ‘jarhead’ with no knowledge of the world he’s visiting, and really no knowledge of anything at all, besides ass-kicking. You’d think this a bad thing, but his immediate success in reaching the Na’vi makes fools out of the researchers, biologists, diplomats and other folks who might be inclined to use their brains before their guns. Again, we look to the uneducated and violent man of action to solve things—a disturbing cultural trend that underwrites, I believe, a lot of the problems Avatar supposedly decries.

But in Sully’s defence, it’s not actually possible to be enlightened by life on Pandora. On Earth, the notion that all life is interconnected can only be grasped through wisdom, patience and tolerance. On Pandora, though, the interconnectedness is literal, and can be grasped with nothing more than additional data. The planet is biologically hardwired. The respect that Sully (or anyone else) has for Pandora’s ecology is simply a recognition that it will, if toyed with, explode. While there may be a metaphor here for global warming, no big-budget action film could present a threat so abstract. Instead, Pandora itself wreaks havoc on the human invaders in exactly the fashion a machine would—switch it on, and it goes. And that makes Sully as enlightened as any man who’s read the instructions. 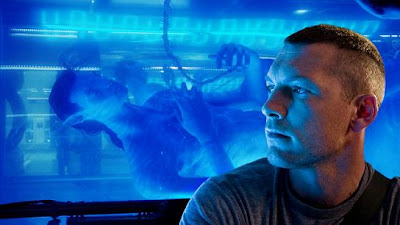 Avatar’s ending is its greatest betrayal. The Na’vi, displaced and massacred in large numbers, rally their forces and drive out the rapacious humans, giving us the happy conclusion our twelve bucks entitle us to. Is this how things generally turn out for the victims of genocide? Were Native Americans or European Jews (to choose but two examples), able to repel their oppressors utterly, and without outside help? A better film—a much better film—might have examined what happens to a culture that oppresses other cultures. It might have asked what sort of spiritual rot ensues when a society with notions of freedom so blatantly denies those freedoms to others. But no—we need a 3-D throwdown, where the bad guys get clobbered with extreme prejudice, then banished quick. 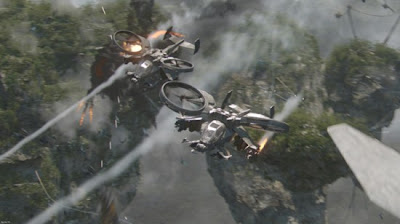 Look, I don’t need every piece of art to have a message. Some films take no position on anything, and that’s fine with me. However, if your film advocates an ethical viewpoint, then entirely fails to support it, you deserve to be called out on that. So I’m calling you out, James Cameron. You’ve made the blockiest blockbuster that ever blocked—a film that, on the surface, calls upon us to end our culture of greed and entitlement, exploitation and ignorance. Yet doing so requires restraint, and the patience to learn, and these are not Avatar’s values at all. Even if they were, no one could hear them over the noise. I had to tuck my legs above the seat so people could exit my row before the film ended. They didn’t hate it, they just knew what was coming and didn’t want to wait. And when the credits finally rolled, a hundred seats around me lit up with blue cell-phone screens:

OMG, those effects were awesome. & the aliens? Totally weird...


***A note about the visuals, i.e. the one aspect of Avatar everyone seems to defend. I, too, was impressed, especially by the colour... once I removed the 3-D glasses and saw how bright it was. The third dimension is worth having, but not at the expense of picture quality.

And btw, if a big, quasi-fascist action flick is really what you’re looking for, choose this one instead. Or maybe this one. They’re just as stupid as Avatar, but at least they know it.
Posted by Chris Edwards at 5:20 PM