The Mysterious Lady has the hottest sex scene in all of silent film.

Oh yes. No Pickfords preserving their chastity here. No damsels saved from the clutches of a thirsty villain. In this film, the thirst is ours, and the tall, cool drink we hope will slake us, is Greta Garbo.


My Greta. Sensual, pristine, lovely Greta, with her symmetrical looks and angular grace, and hint of tragedy. It’s tragedy that makes her seem, in her silent roles, slightly attainable. But her male companions have bad news ahead of them.

Garbo is Tania Federova, a Russian spy, living in 1919 Vienna. We aren’t privy to the spy-part right away, but this being a Garbo role, we can assume she’d be up to something. Her male lead is Conrad Nagel, playing Karl von Raden, a young but well-regarded captain in the Austrian army. Von Raden’s uncle is chief of the Austrian secret service, meaning he, as the man’s nephew, has access to certain secret plans. This makes him a juicy target for Tania. Von Raden, however, must come to her.

One of the pleasures of an early Garbo film is its star’s first appearance on camera—often accompanied by a double-take, then awed gaze, from her future lover. Garbo’s men apprehend her as though all their prior experiences with women amounted to a desert and here, before them now, is a freshwater lake. We, too, are overwhelmed. Garbo’s first scene in Flesh and the Devil (1926) conveys these feelings with genius, but The Mysterious Lady grants us a Garbo-glimpse so exaggerated it borders on parody. Von Raden has gone to the opera, where a private box awaits him. He is late, and so the show has already begun. He enters the box, (now shot from the front, so Nagel is in the background) and discovers Tania, lounged thoughtfully over the railing’s edge.

Von Raden’s already transfixed... and he’s only seen the back of her head! In case we don’t get it, director Fred Niblo makes sure to light the shot from Garbo’s lower right, so rays beam backward from her body and bathe him. She’s literally luminous.

The opera is a love story. When it ends, Von Raden discovers, gleefully, that it’s raining outside. He offers Tania a lift to her home in his coach. He drops her off, and bids her goodnight. Alas, she has left her gloves in the coach. He returns them to her minutes later, and as thanks, she invites him in for coffee... or cognac.

This is fantasy as concocted by a 15-year-old boy. The great beauty is kept in Von Raden’s company not by any deliberate effort on his part (which would carry with it a risk of humiliation), but instead, by a series of happy accidents that make her view him with affection and trust. Von Raden should find all of this suspicious, but frankly, I can sympathize.

Now comes the seduction, in which teasing Tania colludes with Niblo’s willing camera. Garbo’s hair shimmers as she pulls her brush through it. She sings to Von Raden’s piano playing, bearing her throat while the lens pulls close enough to caress it. The lights in her house flicker, then die, and Tania slinks behind a candelabra, lighting each wick with a long match, then disappearing behind a tuft of smoke. Von Raden can’t stand it—he clasps his hand over hers. Her hand is on her breast. The whole magnificent thing can be found here.

All fantasies must end. The next day, Tania leaves for Warsaw (not telling Von Raden why) and he, in turn, is informed by his uncle that Tania is a spy. Unwisely, his uncle then entrusts him with a set of secret plans, which Tania promptly steals before disappearing a second time. 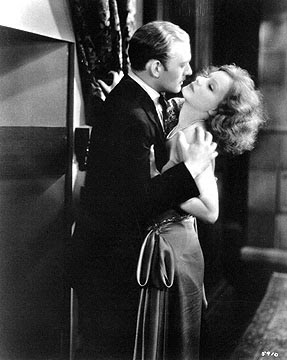 Many a male character’s been destroyed by Garbo’s black widowhood, but most of them got to suffer in silence. Not Von Raden. Before being jailed for a (possibly capital) crime, he is led to a courtyard and ritually humiliated in front of an assemblage of the Austrian High Command. They snap his sword in two. They even pull the gold buttons off his coat.

Now, such a thing should burn out the core of a nobleman. Too bad Nagel reduces all possible rage and bitterness to mere petulance, thanks to a performance made entirely of pursed lips and clenching. His portrayal is uncreative at best; at its worst, it turns a serious scene into comedy.

The secretly freed Von Raden is sent to infiltrate Tania’s spy ring in Warsaw. She is back with her domineering commander and sometimes-lover, General Alexandroff (Gustav von Seyffertitz). Von Raden, posing as a pianist, inserts himself as the entertainment at a party they’re hosting. Alexandroff, who loves Tania’s voice, bids her to sing and the pianist to play.

Von Raden is simmering on the inside, and we must know it. Through double exposure, we see a ghostly vision rise up from Nagel’s still-playing real self, and throttle Tania, whose real self, of course, continues to sing. This image is a little cornball to begin with, but a better actor, I believe, might have kept it on track. Nagel just sits scrunched on his piano bench, pouting and punching the keys like a toddler tossing his blocks. The scene fails because Nagel never makes us think he actually could strangle Garbo. There’s no tension.

The Mysterious Lady continues down its path of fluffy caper-dom. Will Tania and Karl reconcile? Will they even survive? Can Tania outwit the wily Alexandroff, and if she does, must she also defect? Do we care?

Where to fine The Mysterious Lady:

The Mysterious Lady, along with the 1926 Garbo film, The Temptress, occupy one disc of a TCM two-disc set, The Garbo Silents Collection. The second disc features Garbo’s superior 1926 film, Flesh and the Devil.

**Special thanks to Jason Cramp, who purchased this DVD set for me. Best Secret Santa ever.