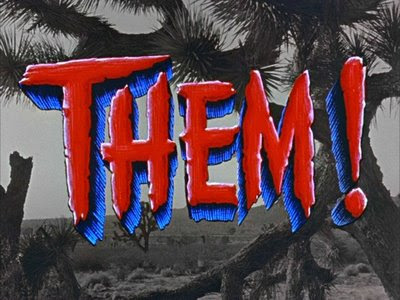 Okay ONE MORE Doomsday Marathon review for Row Three. I love this movie. Love it.

The most important scene in THEM! has not a single giant ant in it. In fact, there’s no screaming, bold declarations or violent acts to be seen—just the quiet after-effects of all three. State troopers Ben Peterson (James Whitmore) and Ed Blackburn (Chris Drake) are searching ‘Gramps’ Johnson’s badly vandalized general store, located in the New Mexico desert, not far from where the Manhattan Project exploded its first atomic bomb, nine years before. Gramps is missing. The store has been half-demolished by something seemingly stronger than a man, and the cash register remains full. The cops step through the wreckage, baffled and silent, while behind them, Gramps’ radio cackles away. Malaria, the radio announcer declares, is being eradicated in many parts of the globe. Another victory for modern science.

Who wouldn’t encourage scientists to eradicate malaria—a disease that kills millions? The men and women working toward a vaccine must have the best of intentions. Likewise, the cops sifting through Gramps’ store are just professionals, doing their jobs. When they find Gramps’ mutilated corpse, flung to the bottom of his cellar steps, they report it. Neither jumps to conclusions, even though they’ve had a weird day already. Earlier, they found a catatonic five-year-old girl wandering the highway, clutching a doll with a broken face. They traced her back to a deserted travel trailer, destroyed much like the store. 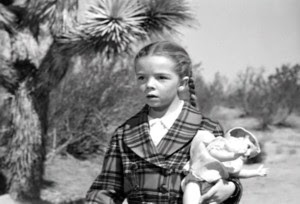 The premise of THEM! is that atomic testing in the closing days of World War II has caused an aggressive species of ant to mutate. The beasts now measure in excess of nine feet, but otherwise, they behave exactly like their tiny cousins. This, according to leading ant expert Dr. Harold Medford (Edmund Gwenn), is an apocalyptic state of affairs for the human race.

Yet again, Mankind has toyed with forces it cannot control, and produced results it cannot abide. But where’s the hubris? Consider the arguments posed by some of THEM!’s closest cousins: Mad Max (1979) and The Matrix (1999), for example, blame the state of their worlds on humanity’s relentless sloth and greed. In The Terminator (1984), Robocop (1987) and to a lesser extent, King Kong (1933), destruction is the child of unfocused ambition, ignorance and over-confidence. Even Godzilla (1954), another film about the Bomb, presents its visitation of violence as a response to an earlier visitation of violence. Godzilla is not a natural creature, nor a species of anything. It's an embodiment of a point. But the ants? They’re just animals. And they only kill because food is scarce where they live, or humans have invaded their home. 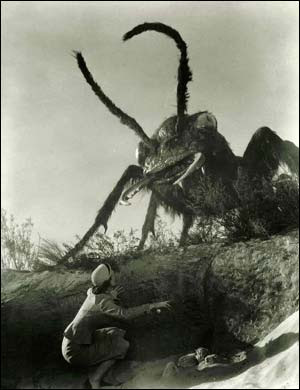 Their human foes are likewise rational beings, able to work together because the cause of self-preservation unites them. Were something as preposterous as a giant ant infestation to actually occur, I believe it would be this way. And mercifully, the movie spares us any excess dramatics from these people. The FBI agent, Bob Graham (James Arness) is a decent man who gets along just fine with local cop Ben—no clichéd beat cop/agent power struggles to sit through here. Both men find Medford a little scatterbrained (he is), but they respect him, and Gwenn refuses to play a social misfit. Bob and Ben are also attracted to Medford’s gorgeous daughter, Pat (Joan Weldon), but babe though she is, she’s also a scientist, and is treated as such. Nor is Pat a blithering coward once the shooting starts, making THEM! the least sexist film I’ve seen in this genre.

How to stop the ants? Dr. Medford is full of ideas, and they have to be implemented fast, lest the animals spread. The heroes locate the entranceway to the ants’ layer, and Medford suggests saturating it with cyanide gas. “If I can still raise an arm after we get out of this place,” Bob replies, “you’ll see how saturated I can get.” Catch-phrases are easy; one-liners are a lost art.

Having gassed the ants, Bob, Ben and Pat must descend to the bowels of the layer to ensure they’ve been finished off. Watch the script-craft here: the characters’ trip to the egg chamber is not only scary, it also doubles as an expository lecture by Pat on the physiology and reproductive habits of the ant. She explains it to the men, and so explains it to us. By the time they reach the egg chamber, and discover the embryonic husks of two escaped ant-queens, we know how bad that is. 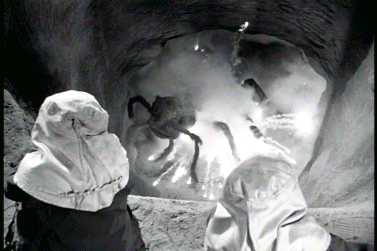 The second half of THEM! moves the action of the sewers of Los Angeles, where one of the queens has landed to start a new colony. And so we watch the police, scientists, politicians and military coordinate their efforts to minimize panic and maximize extermination. How odd to see politicians portrayed without bombast or obvious corruption, and a room a full of generals demanding something other than immediate violence. Watergate changed a lot of things, I guess.
THEM! is a mid-century monster movie—how good does it look today? Well, the ants themselves aren’t too convincing, though director Gordon Douglas uses every trick he can think of to hide the seams. Filming in black-and-white (not the original plan, apparently) helps too. THEM! also rises to the challenge facing every movie with a giant monster—hiding that monster—with predictable logic and economy. Early scenes obscure the beasts in a sandstorm, which is creepy in its own right. Later, Medford explains that the ants would only venture out at night, because only then is New Mexico’s desert comfortably cool for them.

THEM!’s cast-members could have been forgiven for bringing the ham, but none did. It’s quite the cast, too. Arness of course went on to long-running TV fame as the star of Gunsmoke; Whitmore too remained a star for years, including a memorable performance in The Shawshank Redemption (1994). Character actors Fess Parker (Disney’s Davey Crockett) and Dub Taylor (you know him, trust me) play small roles. Then there’s Edmund Gwenn. Gwenn had a long career on stage and screen, but you might know him best for his role as Santa Claus in Miracle on 34th Street (1947). If you think about it, Miracle has more in common with THEM! than any dystopian fantasy film does.

My main criticism of THEM! would be this: how can an animal with a hard exo-skeleton possibly move, much less fly, at that size? Perhaps this is too much burden for a monster film to bear, but THEM!’s screenwriters thought their way through everything else, so they could have explained this away, too. Here’s an answer, though: on artistic grounds, the fallacy works, because we account for the illogically large creatures by making them the norm; the humans, by contrast, become something small. Once the final battle begins in the sewers, it is clear that the humans are the infestations, not the ants. (I’m sure that wasn’t Douglas’ intent, but it’s fun to argue.)

THEM!’s ambiguous conclusion owes much to human ingenuity. But then again, so did the ants. Among its other qualities, the film is unique in its refusal to judge the morality of progress—progression simply happens, and with it, new challenges. Overlooking a burning ant carcass, Dr. Medford opines: “When Man entered the Atomic Age, he opened a door into a new world. What we eventually find in that new world, nobody can predict.” But he never says we should stop trying. That just wouldn’t be reasonable.
Posted by Chris Edwards at 11:40 AM