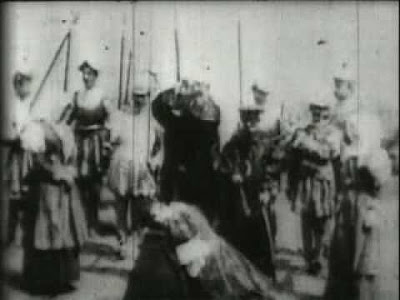 Gentlemen of the press, and assorted members of the fledgling cinematic community: let this serve as an official statement from the Ghost of Mary, Queen of Scots, upon viewing a filmed re-enactment of her execution. Today is September 9th, in the year of our Lord, 1895:


To the first of your queries (per our garments that day),
selected we scarlet-hued, humble array;
for it’s red that most martyrs do bear to the blade—
not blurry and trembling gradations of grey!

More’s the pity that colour’s but one detail lost;
for’s gone too the weeps of my loved ones, aghast
at the Virgin’s base cruelties, crudely here glossed.
Oh! rueful we ’member dismemberment’s cost.

And the laughs, and the giggles, and snickers loud snuck
when up came the dummy’s cut-head from the muck!
Would that we’d had even that mannequin’s luck—
for twice ’pon our head that brute-iron struck!

To our subjects: are tragedies viewed in this way
e’er a proper or noble excuse to be gay,
or be they but dumb-shows; indecent displays;
a flickering glimpse of a Crown sad betrayed?

A pox on you bulb-shining, lens-profiteers!
A curse from our ghost that’ll haunt future years:
may your films grow most lengthy, orchestral and smeared
with the colours of true life from whence now you veer.

And then, common artists, your schemes will prove naught,
for forced will you be then to fair-paint the Scot!

And for dessert, Wikipedia’s entry on Mary, Queen of Scots.
Posted by Chris Edwards at 9:16 PM