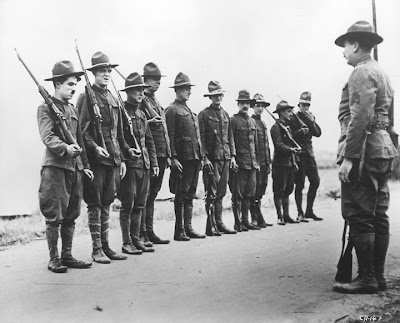 The First World War (1914 to 1918) holds particular fascination for me. It’s this war, not its sequel, that brought about the collision, then the fissure, between an old notion of chivalrous struggle and a new reality of automated combat. Of course, the old notion was always bullshit, but some of the romance remained until it was gassed, blasted and crushed into the mud and blood of the Western Front.

By 1918, the pull of a trigger allowed a single man to tear hundreds apart, and do so casually, or even unwittingly. Hand to hand combat, when it occurred, was a degrading affair, following, as it often did, weeks of sitting in flooded, septic trenches. Sometimes, soldiers were so close to their future victims that they could converse. I find that sick.

I write these things upfront, because it is with such images in mind that I started watching Shoulder Arms, a 46-minute early feature by Charlie Chaplin, made the same year the war ended. It’s a comedy, and at times an ingenious one, but how appropriate a subject is trench war for a slapstick comedian?

Let’s start with the bigger issue. I don’t think it is ‘wrong’ to laugh at war, in the wider sense that I don’t think censorship is right, most of the time. And whether we’re proud of it or not, humour is a practical art form—we must admit that what makes us laugh is, by definition, funny to us. Shoulder Arms, in its early scenes especially, is pretty funny. The Tramp, as a somewhat dazed Doughboy in a French trench, faces various memorable misadventures.

However, if humour is the pragmatist’s art, how useful is war as a subject? The brutality of the First World War cannot be made light of, at least if it’s acknowledged. Chaplin evidently knew this, since in this film, he tries to ignore it. Yes, the Tramp is aware he can die (he shows cowardice, though not consistently), but no one ever dies on-screen in Shoulder Arms, even when he and his fellow soldiers go ‘over the top.’ In fact, the trenches, with the exception of one notable scene, look rather comfortable, and extremely clean. 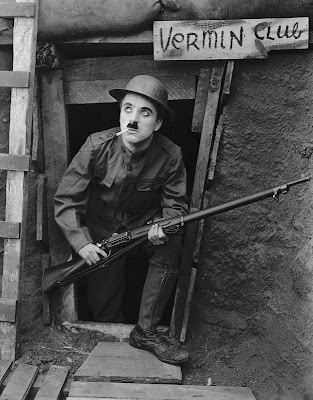 This made it difficult for me to focus on what I was seeing, rather than what seemed to be missing. Maybe Chaplin expected that, too. There’s a scene mid-way through Shoulder Arms where the Tramp fires a series of rifle shots from his mount in the trench, aiming at something off-screen. For every squeeze of the trigger, he chalks a hash-mark on a wooden slat, then re-loads and fires again. It’s off-putting to see this character—a thief, but always gentle-hearted—committing murder several times in nonchalant style. But then the Tramp fires his last shot straight up; bringing down a bird, it looks like. We never see the bird, but that’s my take on it. I’d call that a rib on Chaplin, by Chaplin.

As in many of his later features, Chaplin’s character in Shoulder Arms has domestic sensibilities, but no real home. Much of the humour, then, comes from the Tramp’s talent for finding amenities where none ought to exist. Shoulder Arms’ most inspired gag builds off of this talent—beginning when the Tramp’s quarters are swamped. By ‘quarters,’ read ‘hole.’ The Tramp and four other soldiers share a burrow dug beneath the lip of the trench. Inside is a double-decker bed, a phonograph, an oil lamp and other household basics. Following a long shift in the rain, the Tramp returns to find this space flooded up to his chest. His roommates are asleep—three of them piled into the top bunk of the double-decker bed (the only bunk above water) and the fourth sleeping submerged, but for his face. The Tramp must then find a way to sleep on the bottom bunk (which is underwater too) or not sleep at all. Fluffing a pillow, in this case, proves a bit pointless.

Though the flood scene is one of the longest in the movie’s first act, it is self-contained. In fact, Shoulder Arms could be easily split into two films: the first a collection of satirical (and bloodless) episodes about life in the trenches, and the second, the Tramp’s ill-defined mission to spy on the Hun. It’s in the second half of Shoulder Arms that our hero, liberated from the front lines, begins to have a plotted adventure.

Action in the second half centres around a heavily shelled farmhouse in the German countryside. Again we see Chaplin satirize domestic life, as the Tramp seeks shelter in a building missing most of its walls, yet still finds a beautiful love interest (Edna Purviance) within. Purviance, a talented actress and frequent Chaplin collaborator, needs merely to keep up and look pretty here. She’s the object of lust for a gaggle of German soldiers that grows, in both girth and rank, as the action advances, until the Tramp is in the presence of the Kaiser himself, played with obesity by the star’s half-brother, Sydney Chaplin. Unlikely events ensue.

Shoulder Arms feels strange. As a collection of parts, its parts are successful. Chaplin’s wit is there, and the physical comedy, though not sublime, is always competent. But it is several films, not one, and little holds them together beyond a common theme. 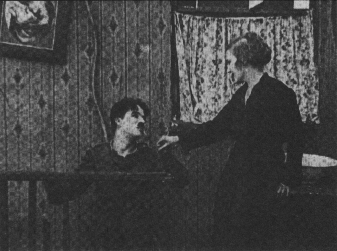 I’m tempted to go ‘meta’ here, because 1918 was such an interesting time in Chaplin’s career. Like several other film stars of the time (including Mary Pickford and her then-husband, Douglas Fairbanks), Chaplin publicly supported the First World War—yet he was a noted pacifist later in life. By the end of the war, he was big enough to produce a near feature-length film, but not so big that he could attempt social commentary, and the enormous risks it entailed, as he’d one day do with Modern Times (1936) and The Great Dictator (1940). Had he made a film about war later in his career, it surely would have been his most maudlin. But in 1918, Chaplin’s talent, popularity and social conscience merely co-existed—they could not yet form a stronger whole.

Where to find Shoulder Arms:
French distributor MK2 owns the rights to most of Charlie Chaplin’s later works, distributed in North America by Warner Brothers. Shoulder Arms, along with A Dog’s Life (1918), Pay Day (1922), The Pilgrim (1923), and other films, can be viewed as part of The Chaplin Revue, a two-disc set. This link provides some information.
Posted by Chris Edwards at 10:27 PM