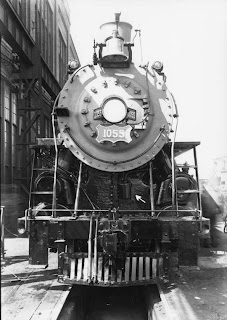 Labour, men: with shovels, then
with axes pick the new-built track.
The sweat each swing to your head brings
seems endless as the row of beams
you hammer at.

Look, men: to that darker shape
the distance bears: the growing square
that from the smoke toward you tears.
Superiors behind you wave,
and back they step.

Feel the shake of warning wheels?
Hear the metal clacks and squeals?
Retreat! and with your foremen, call,
and wave your handkerchiefs, you all;
to greet those coming.

But all you standing to the side
leaves track alone t’ween train and me!
And on me now the train has trained
unguidedly—and now I’m froze!

‘Girth,’ its girth I think of first—
the Black Diamond Express’ll run
right through my frame! Then ‘speed’—
as train cars full’ve your friends quick pass
and leave me safe. 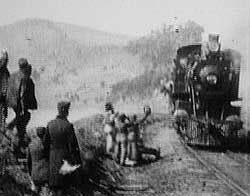 Where to find Black Diamond Express, no. 1:
Black Diamond Express, no. 1 is among the many brief, 19th century films found Disc One of Kino International’s must-have, four-disc set, Edison: The Invention of the Movies. The film is preceded by a short commentary from several film scholars. Grainier versions can be downloaded from YouTube, though they may not be the same version, as the popular film was re-made over and over again.
Posted by Chris Edwards at 10:08 AM