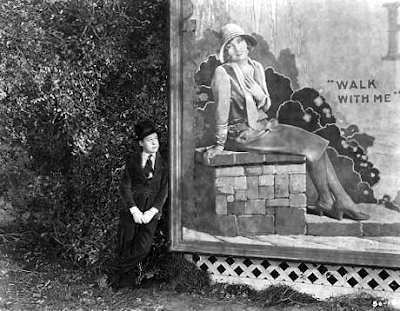 I don’t know what kind of man Harry Logan’s supposed to be in Tramp, Tramp, Tramp. Whatever techniques his father used to raise him did not work, as Harry (Harry Langdon) is a profoundly maladjusted young fellow. On the other hand, the world portrayed in this movie makes no sense, either. When a man can defy social, then rational, and finally physical bounds, what value is there in being normal at all?

Harry is a typical Langdon character: an awkward little creature who responds to challenges with bewildered, dissembling blinks and gestures, moments of hesitation and bursts of bashful circular motion. Everything is new and puzzling to Harry, who is not so much a man-child as a man-infant. If he were left to his own devices he would, we suspect, be destroyed.

This view is challenged by Amos Logan, Harry’s wheelchair-bound father. Amos (Alec B. Francis) is founder and proprietor of Amos Logan & Son, a Burton, Mass.-based purveyor of hand-made shoes. Unfortunately, Burton is also home to the colossal Burton Shoes factory, which is why Amos Logan & Sons resembles a shack. Burton’s buying power is bolstered by its lovely billboards, featuring Betty Burton (Joan Crawford), daughter of the founder. Her tagline: ‘Walk with me.’

Harry loves that girl in the poster with his whole heart. Nothing else in life seems important to him. Decide for yourself whether that makes him indifferent to his circumstances, or simply unaware of them; for indeed, his circumstances aren’t great.

Amos is facing eviction, says his John L. Sullivan-like landlord, Nick Kargas. Amos calls Harry into the room, and explains to him that in fact, they do not own Amos Logan & Son; they’re renters, and they’ve got three months to pay their debt. Harry blinks. "Does this mean I don’t get my new bike?"

Harry is thrust into the world. A chance meeting nets him work as Kargas’ gofer; we learn that Kargas is also a world champion long-distance walker, and intends to compete in a walking race to California, sponsored by Burton Shoes. Harry’s help invariably proves dangerous, and he is soon fired by his barrel-chested boss. But Betty takes pity on Harry and enters him in the race as a consolation. 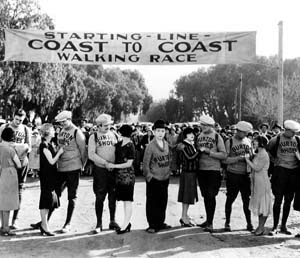 Too bad we never learn the rules of the race. We do see walkers march from the starting line in Burton, Mass., wearing short trousers, backpacks and sweatshirts emblazoned with ‘Burton Shoes.’ Walking to California takes a while, so we’ll assume they’ve got three months—Harry’s deadline to get the money. But as to the path the walkers take, we’re never given a clue. Nor do we see them eat or sleep, and so the enormous comic potential of the walking race is frittered away.

Perhaps Langdon’s heart wasn’t in it. Buster Keaton, with his superior athleticism, could have made more of the race itself. The spectacle-minded Harold Lloyd might have devoted the film’s entire second half to it, mimicking his format in Safety Last! (1923) and Speedy (1928). But Langdon’s comedy shone brightest when things were quiet.

Tramp, Tramp, Tramp’s best scene is no stunt, but the sublime first meeting between Harry and Betty. He’s staring longingly at one of her posters when she spies him, then sneaks up behind him. Betty knows exactly what drives Harry, and still she expresses warm pity toward this weird little man--it tells us just as much about her as it does him.

When Harry turns around, it’s, well, remarkable. He doesn’t overreact, at least in the manic sense; he simply wanders the little patch of park they’re standing in, sitting down, standing up again when she joins him; half-talking to her, half-talking to himself. Langdon’s reaction, a single take lasting more than a minute, confirms the man’s pantomime chops. And the pacing of the scene is almost modern. If Langdon has a successor today, it is Will Ferrell, who has also built his career on meandering scenes that are funny, in part, because we’re aware they are overly long. 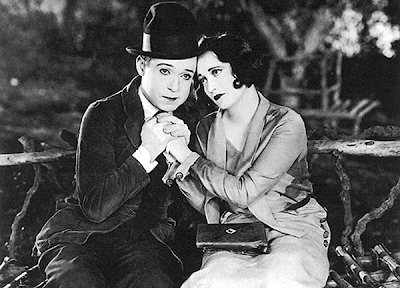 Harry is convinced he’ll be marrying Betty soon. We’re not so sure, but Betty is certainly a good soul. With her best wishes to power him, Harry proves a formidable walk-racer, narrowing the field to him and Kargas alone. This, despite being incarcerated for at least two days in the middle of the race.

Harry ate berries, you see; fruit belonging to a farmer near the race-route. He’s placed in a chain-gang to pay his debt, and ordered to break rocks. Unable to lift any of the available tools, Harry tries to break a large stone with a tiny ball-peen hammer, which makes no sense. He tries to be more industrious by switching to smaller stones, but the ones he smashes are already small enough, and so his labour is worthless. Finally, one of the prisoners uncovers a cache of weapons and stages a (gang?)-break; Harry is handed a loaded pistol, which he looks at clearly before using the butt-end in place of the hammer.

How could anyone be so stupid? Are we to assume Harry has never seen a pistol before? If he has, why doesn’t it bother him? Gags like this were common enough in slapstick, but usually, the comic would be handed the gun without seeing what it was. The gag works because the man’s unaware of the danger he’s in. Yet Harry is both aware of the gun, and seemingly unaware that guns are dangerous. This man is not credible. And the most unlikely scene is still to come.

Weeks later, Harry and Kargas reach the western town of Sand City, where Betty and the Burton executive team are waiting to greet them. Before long, a cyclone strikes the town, sending the residents to their storm cellars. Harry, however, seems not to notice the storm for what it is. “Ah!—at last a breeze.” he declares, and fights the obviously gale-force winds to make it to a nearby barbershop. His top priority is a shave after that trek through the desert. When he finally does face the mighty funnel, Harry defeats it (literally driving it away) by hitting it with a brick.

The intertitle following this sequence seems to acknowledge its foolishness, reading:

But two of those examples, far-fetched though they are, can at least occur. Harry’s outcome so untethers Tramp, Tramp, Tramp from reality that it would only make sense if the hero were someone like... Harry.

Oh. Well then, what’s left to say? An irrational creation finds fame, fortune and beauty in a world built, it seems, by an irrational creator? If your only rule is that there are no rules, I guess Harry Logan is, indeed, the man to call. And Tramp, Tramp, Tramp is the film to watch.

Where to find Tramp, Tramp, Tramp:
Kino International’s Harry Langdon... The Forgotten Clown includes Tramp, Tramp, Tramp, along with two of Langdon’s other feature films, The Strong Man (1926) and Long Pants (1927). Look for it here.
Posted by Chris Edwards at 4:13 PM