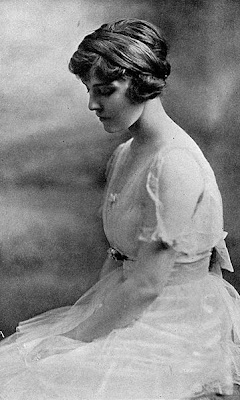 Last night was the 90th anniversary of The Music Hall, one of Toronto’s oldest theatres-that’s-still-a-theatre. A prime part of The Danforth (Greektown) for most of its history, The Music Hall is now preparing for the Toronto premiere of The Toxic Avenger. However, enough time could be taken from the hanging of fake slime* to celebrate the venue’s long life, and so, alongside 750 (!) other patrons, I attended the unveiling of a commemorative plaque, followed by several informative and gracious speeches.

Now, I love me a good plaque, but that wasn’t my main motivation for going. I was there to see a silent movie. The Music Hall was promising us Dollars and Sense, a romantic comedy starring Madge Kennedy, a young actress who also starred in Through the Wrong Door—the first film ever screened in that theatre, way back in 1919.

There was more: live accompaniment by the talented pianist, John Kruspe, and several violinists. While I’ve seen a number of silents with live accompaniment, I’ve never had the opportunity to listen to more than a lone piano and, I might add, I’ve never seen a silent film on a screen this large. The Music Hall’s drawing power last night was impressive, and the occasion justified it. 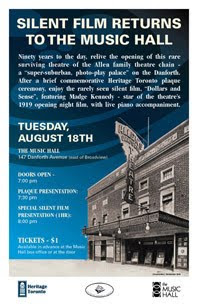 Did the film, however? Maybe it was the size of the event, or the screen, or the sympathetic crowd, but I think yes, it did. In an entertaining speech before the movie began, film historian Paul S. Moore described Dollars and Sense as having ‘almost no plot,’ and while that cannot be true in the literal sense, it is the case that very little happens. Kennedy plays Hazel Farron, a chorus girl turned jobless waif when her show is cancelled. The show, an early intertitle points out, might have been more popular if the rest of the girls looked like Hazel.

Hazel’s looks are well-appreciated by the wealthy, and chubby, Geoffrey Stanhope (Willard Louis). Stanhope’s wingman is George, who happens to know (in the biblical sense) Hazel’s running buddy, Daisy. Despite Hazel’s protest (“I hate men!”), she agrees to double-date with Daisy, though that doesn’t last long, as George and Daisy happily ditch the new pair and start making out in the back seat of a different car.

All this is fluff. But luckily for us, the actors take their material seriously and elevate it. Kennedy has tons of charm and enough comedic timing to hold up her end of things. Louis goes further—a lot further—by injecting a flood of real pain into his character’s face whenever we’re about to pin him as the sneering villain. The events assist him. You have to wonder why a man this well-off needs help finding a date, at least if looks are all that matter to him, as he seems to imply they do. Why, when he and Hazel are seated at dinner, does he ply her with drinks almost right away? This is not a confident man—it is a man who believes he ought to be confident, and considers the possession of a pretty girl as important to his image as a gold watch and a long car. That doesn’t make Stanhope a good guy, exactly, but it doesn’t make him a raw villain, either.

The date is a disaster, and Stanhope departs Hazel’s life with the promise that she will one day ‘need his help,’ which is very much a code-phrase for prostitution. Hazel is broke, but not that broke, yet. Her wanderings soon take her to a bakery run by David Rogers (Kenneth Harlan), a man so decent that he, too, is nearly broke. (A compulsively charitable person should never do business in a ghetto). Hazel and David are brought together by a particularly clever version of the ‘meet cute,’ and Hazel is hired as David’s assistant, providing labour and, she suggests, a level head. 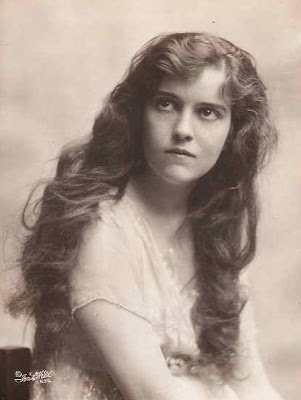 What does Hazel get in return? We’re to think that David’s example softens her, but really, she never seemed that jaded or cynical to begin with. Check that: “I hate men” is pretty damn cynical, but the line reads comic (The Music Hall busted its collective gut) and Hazel is ever the good girl with standards. For her to fall in love with David seems natural, and the only dramatic tension in their relationship rests on the possibility that David’s big heart and lack of business sense will either starve or exhaust him into an early grave. Can Hazel, as David’s employee, save them both? Not on her own.

Ah yes, we know who has the money to do that. And maybe we know what he’ll expect in return. Dollars and Sense now detours down the road of Indecent Proposal (1993), made more interesting by Louis’ increasingly nuanced performance. I love the way Stanhope faces Hazel in the bakery, informing her of her upcoming appointment in his hotel room—he takes the time to place his gloves in his upturned, fancy hat, then places the hat on David’s countertop, all the while fixating on Hazel. It is a precisely choreographed gesture; one we suspect he would not have performed if David were present. Scenes like these enflesh a character that, on paper, must have been bone-thin. When Stanhope’s motives eventually prove to be more complex than advertised, we are suitably prepared.

Dollars and Sense, like its antagonist, has two sides. Part of it looks backward, to the clear-lined morality plays of the 1910s and earlier. The (ostensibly) virginal heroine preyed upon by lascivious high-livers, the portrayal of charity and humility as antidotes to social ills—this could easily be the meat of a Biograph short. But the decade following this film would introduce a hungry audience to sexy, unapologetic darlings like Clara Bow, Louise Brooks and Greta Garbo, any of whom might have chosen Stanhope, not for his own merits, but because life isn’t fair and doesn’t look to be getting fairer anytime soon. The points of flux in Dollars and Sense: sex, self-worth, cashflow and compromise, evoke the Jazz Age more than any Victorian fable. It still works.

Where to find Dollars and Sense:

The Library of Congress? I believe that fine institution was responsible for the DVD we got to watch. A quick Internet search tells me the film is unavailable, and that is a shame. Dollars and Sense isn’t a lost masterpiece, but it is a lot of fun.

Posted by Chris Edwards at 3:45 PM