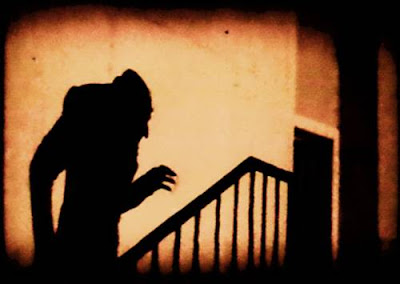 A few links for you today, illustrating a phenomenon that brings me hope.

Nosferatu (1922) is one of the silent era’s most successful products, not simply for its quality, but also its longevity. The film has thrived better than most in this, the age of sound (and sometimes, noise). Some credit has to go to the director, F.W. Murnau, whose fame is old and strong among those who appreciate film. On top of that, we have the public’s enduring interest in vampire stories, and if Max Schrek’s ghastly, bald spectre bears little resemblance to Lugosi, well, that only makes it more intriguing.

Most of all, we have the images: Compositions of pantomime, makeup and light; indoor, outdoor; Surrealist, naturalist, blatantly and frighteningly mechanical. Nosferatu is so weird that we wonder what kind of mind could unearth such a thing from its depths. And knowing it is a human mind, we wonder what we could unearth from our own.

Like all great silent films, Nosferatu is in one respect terribly vulnerable: its power is destroyed by inappropriate musical accompaniment. The wrong tune, particularly if it’s ‘chirpy,’ slays Nosferatu just as the rising sun does a vampire—swiftly, totally, ruthlessly.

Low and ominous, organ-heavy, liberal with the cello and bass; this brings Nosferatu’s dread to flower. However, I’ve heard it done other ways. A score need not be sympathetic at all, as long as it makes a point, rather than being the product of indifference. I can even accept a score that makes the film goofy, so long as the artist is trying to make a goofy film.

Whatever the artist’s vision, he or she has a lot to work with. And for those without the time, inclination or means to score an entire film, there are still ‘trailers.’ I’ve noticed these on YouTube for some time now—clips of notable scenes from various silent films, set to a piece of music the musician feels makes his or her point, whatever that point might be. I think they’re great (even when they’re not) because they prove the enduring power of silent film. Among its many other merits, is there any art-form more suited to the age of the sample and the mash-up than silents? The future is bright, and here’s a few examples of why:

This creepy one retains the feel of the film with very modern visual pacing. I’d love a copy of the whole movie done with this score.

The score for this trailer evokes evil, but of the vast and ancient kind. It is The Rheingold Prelude, used for Werner Herzog’s brilliant, 1979 remake of Nosferatu.

This brass- and percussion-heavy version underlines the importance of Nosferatu in cinematic history, but it fails to capture the film’s subtlety. What do you think?

Not sure what this kid was aiming for, but let’s appreciate the plug. Start ’em young...

This is a different approach: the music is set to the scenes, rather than running as a continuous piece throughout. The effect is interesting, but maybe a little intrusive, and even camp. It also sounds like something from The Twilight Zone.

Here’s an approach that only works for a trailer, where you can re-cut to fit the beats. Clips of Nosferatu set to Beethoven’s Symphony No. 7 in A (Op 92). Again, the effect borders on comic.

And last but not least. Freddie Mercury was a fan of silent film himself, so I consider this one more than appropriate.

There are more Nosferatu trailers to see, and many more paying tribute to other, great silent films. Have a look, and see where our great medium is headed. 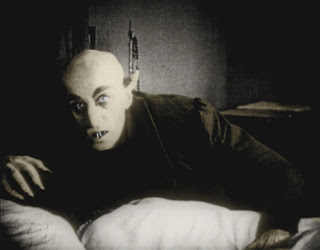