A Link to a Link 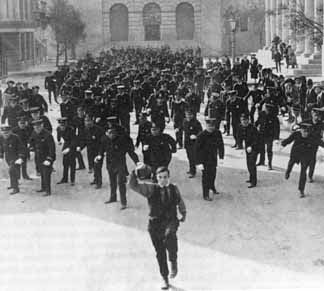 It may be cheating to update my blog with an update of someone else's blog, but whatever. Jim Emerson's Scanners: Blog has posted a YouTube link I think you'll find fascinating. It features footage of Buster Keaton's 1922 short film, Cops, run at projection speeds equivalent to the frames-per-second (fps) the scenes were actually shot at. Keaton often 'undercranked' his camera, which lowered the number of frames-per-second; this, in turn, made the scene appear accelerated when projected at a faster rate. Historian Ben Model shows how scenes actually looked when projected at their original rates of 16, or even 8 fps: quite plodding. Played at a faster rate, however, they are manic and precise all at once. Of course, Keaton et al were conscious of the speed at which they were being filmed; hence, they acted in more deliberate fashion, with longer pauses between movements then you'd expect.

Projecting an undercranked sequence at higher speed makes the scene look 'unnatural,' but it does achieve unique comic effects. Perhaps there's a point to be made here, not just about the depth of skill these silent directors possessed, but also about the value we moderns place on 'realism.'

To see a version of Cops played at regular speed, click here. Scenes that seem unnaturally fast were undercranked. No sound on this one, unfortunately, but the film is widely available through Kino International.
Posted by Chris Edwards at 11:15 AM