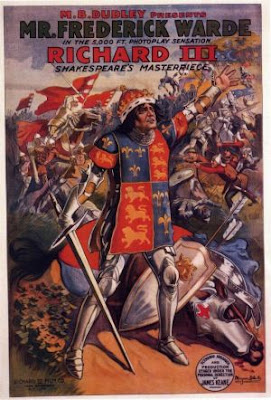 Shakespeare... without the words...

A skeleton is not the man—can a synopsis be the play? I’ll admit to a little discontent, writing of Richard III on this summer day; I’ll voice it, then off I’ll head to more worthy topics. This movie pretends to a better throne than that of a bastard.

The Life and Death of King Richard III is the oldest surviving American feature film (that is, a film longer than four reels). It was produced by a stock company of actors, surrounding a notable tragedian, Frederick Warde, in the title role. Warde was a fading star of the stage, but despite this (or because of it) he was happy to commit his performance to film. And so we have him, in all his wordless, skulking, sneering glory. Warde’s hands perpetually grasp at the air and he reacts to every murder as though he could taste it. (See an example, starting at the 1:00 mark.)

Warde’s hunchback lurch and black costuming let him stand out in every scene. Give him credit for this; Richard III, the movie, is about spectacle, and its frames are filled with soldiers and nobles and horses bedecked in armaments and elaborate fashions. But the actor and the film have different goals, and they make Richard III an uneven thing to watch.

I think director James Keane did his best. The source material, of course, is a five-act play; fourth of a four-play series beginning with Henry VI, Part 1. Keane, with no soundtrack and a running time of barely one hour, could not do justice to Shakespeare’s vision. Instead, he went his own way. The Bard’s dialogue is abandoned; the few intertitles we do have simply prefigure scenes, rather than presenting dialogue. Their language is descriptive and plain: “The Duke of Gloster[sic] departs for London,” etc.

And what is left of Shakespeare’s greatest villain? What can we glean from a de facto mime? On stage, it is Richard’s interior monologues that give him multiple angles—they are absent here. The jibes he withstands over his deformity are mostly missing, too. Warde, perhaps by necessity, reduces this king to a scenery chewing bad guy, albeit a pleasurable one to watch. 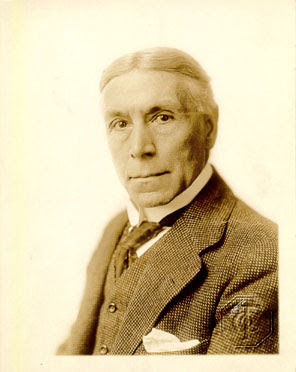 Some verse, some verse, my kingdom for some verse. But my kingdom be this blog, and be it a noble blog if it but criticizeth so? Nay. So now let’s talk about what makes Richard III a movie worth watching. And there happens to be a lot.

As readers of Silent Volume now know, I’m fascinated by very early silent films—the fixed camera, mostly pre-Birth-of-a-Nation movies that brought every subject imaginable to the screen, but did so with one foot still firmly planted in the theatre. These films are rarely great art, and when they are, it’s mostly through the genius of set design. However, they fascinate and entertain me because they are self-consciously cinematic. They’re always saying: ‘See! See what this new medium can do!’ and there’s a joy in them. They’re gloriously fake, and they take risks almost no director takes today, outside of animation.

Richard III is an especially fine example. The commitment to a legendary text, and to historically accurate melodrama, restricted Keane’s arsenal of the fantastic. The film had to be grounded; less manic than the fantasy pieces being produced at the time, but more complex than the unsubtle morality plays also making the rounds in tents and movie houses. Most importantly, it had to blow the audience away with spectacles only the screen could deliver. The result is a film that, ironically, achieves its own sense of Richard-like interior conflict, and memorably so. 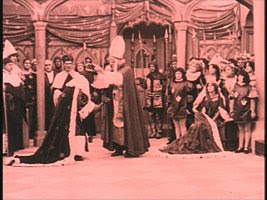 Richard III revels in depth. One of the Duke of Gloster’s (the future Richard III’s) first scenes puts him on horseback, riding fast from a spot in the distance, toward us, then past us. We’re treated to several elaborate processions, caravans and victory marches, perhaps one hundred actors’ deep, and in each case, the camera lingers over a minute as the crowd cheers and the noblemen snake past. When the Earl of Richmond sails to England to confront Richard, we see his ship in the bay. It’s a real ship, manned by men in armour.

All visual delights no stage production could match. And yet, the stonework of the Tower of London is nothing but cartoon fakery. And the dungeon’s flimsy doorways are clearly painted—not to look a certain colour, but simply to look like wood. Their unreality would work well enough on stage, but no theatre audience could get as close as Keane’s camera does. Richard III is a blatant hybrid of stage and screen techniques.

To me, three scenes illustrate this best. One occurs when Richard is crowned. He sits on his throne, raised, but in the background of the stage; he's at the far right side, but angled to our left. The positioning makes Richard look small and remote, but his courtiers, who bow before him in the foreground, become hulks. When they return to their feet, they seem like an enormous and powerful collective, wielded by this pigmy of a man—or perhaps, great figures ruled by their natural inferior.

Richard’s famous nightmare, during which he’s haunted by ghosts of those he’s killed, is another chance for the filmmaker to show his stuff. Richard lies in bed on the left, while the ghosts appear on the right via double-exposure. It is this camera-trick that gives ghostliness to Richard’s victims. Yet the scene is embedded in theatrical norms; it is not the composition of the scene, but the transparency of Richard’s phantoms, that sets it apart.

The best example is also earliest in the movie. Upon arrival in London, the Duke of Gloster confronts the aged King Henry VI, and runs him through with a sword. With Henry still bleeding to death on the floor, Gloster steps out on his balcony and beckons to a cheering crowd below.

This scene is a compromise to begin with—it actually happens in King Henry VI, Part 3, not Richard III. And while Henry’s murder takes place in an unremarkable theatre setting, when Richard sets foot on the balcony, things change tremendously. Henry’s balcony sits at the right foreground of the frame, and the cheering crowd stands below it to the left, against a clearly painted set. This would look flat on stage, and would be difficult to pull off, since it requires a very wide set to encompass both interior and exterior. But Keane does what only a cameraman can do. He films Warde from slightly above—at a line of sight balcony viewers could have had, but never at such close range. The effect is to crush perspective, placing Richard both above and within the throng. I was reminded of medieval paintings, with their outsized figures and abstracted, tiny buildings. Not an inappropriate image, given the subject.

Richard III has many other moments of transgression between stage and screen—they make the film intriguing, despite its inherent flaws. But the one I want to leave you with is different. You see, Warde is somehow ‘present’ during most of his dastardly deeds—if someone’s to be murdered at his command, he’ll be lurking behind a pillar while the deed is done. We spy him, always, like an audience in a theatre would. Except once, when Keane gives way fully to his new medium.

Late in the film, we see Richard’s wife, Lady Anne, dying in her bed. The scene is not a close-up, but it is tight for a medium shot. Over her stands a doctor, and behind him stands Richard, blackened by shadow. We see him slowly point his finger at Anne, and the doctor pours her a glass of poison. There are no grand gestures, no manic expressions to be seen—only lighting, subtlety, and the intimacy of the lens. And Richard is never scarier.

Where to find Richard III:
The Life and Death of King Richard III is distributed by Kino International. The disc includes a short, but informative documentary on the re-discovery and restoration of the film. Richard III also boasts a new, symphonic score, composed by Ennio Morricone. The music is both martial and ominous, with a heavy dose of violins and horns. It’s very loud; sometimes beyond what a scene really needs, but pretty cool overall. Look for the disc here:

Posted by Chris Edwards at 5:46 PM