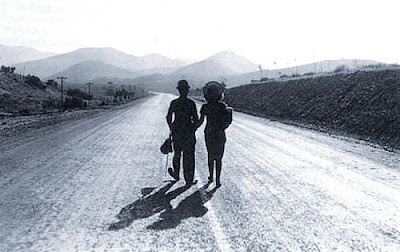 (This article's also been posted as part of Row Three's The Dirty Thirties Movie Marathon. Row Three is a good place to go if you're feeling non-Hollywood, or just a tad Hollywood. Look for them here.)

Charlie Chaplin was the Tramp in almost all his films, so all his films, in some way, dealt with want. His first Depression-era movie, City Lights (1931), was a melodrama; a love story that depended on the poverty of its two leads to set up the gags. It could have been set in 1900 as easily as 1931. But his second, Modern Times (1936) does not present a poor man so much as a poor society, and the gags rely not on the Tramp’s poverty, but on the root cause of everyone else’s.

Chaplin blamed mechanization. He wasn’t a Luddite; he just felt that efficiency, if made an end unto itself, would place the machine above the worker. So it is in Modern Times. The Tramp is now A Factory Worker—the ‘nut tightener’ on a far-too-rapid assembly line, wielding a pair of wrenches on an ever-continuing row of metal plates. The plates pass him, then two other workers, then disappear into a tunnel. When his break begins, he walks away, still jerking with the same motions as before, trying to tighten anything nut-like around him, including the buttons on a woman’s blouse.

Audiences must have felt uneasy seeing the Tramp—then the most famous character in the world—so close to collapse. He would have reminded them of simpler and happier times. In fact, the whole film would have. It’s a (mostly) silent movie produced well into the sound era, and it’s loaded with references to silent comedy and action pictures. But modernity perverts it all. 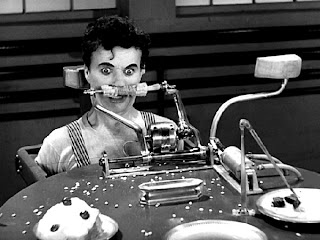 The Tramp, who once found the most inventive ways to steal a snack, is now strapped into a chair before a revolving set of dinner plates and metal arms that stuff processed food down his throat. He dangles from a huge hook, like Douglas Fairbanks brandishing his sword, only now it’s an oilcan. He runs from a cop, but stops to punch his timecard. He ends up in a mental hospital.

He gets out. Only steps from the hospital, the Tramp sees a red flag fall off the back of a pickup truck. He picks up the flag and inadvertently triggers a Communist march, then a police crackdown, followed by his incarceration.

Back on the street, the Tramp collides with a young woman (Paulette Goddard), escaping a bakery with her stolen dinner. Goddard is ‘The Gamin’ (gamine, or street urchin); in this case, the eldest sister of a family of girls, without a mother when the movie begins and without a father after a food riot leaves him shot. The Gamin is swift, smart and wickedly sexy, but she’s too desperate to avoid getting caught. 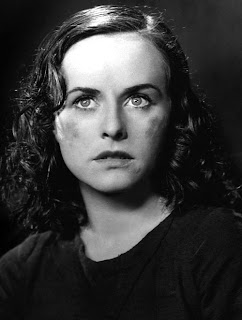 Like the Tramp, the Gamin has nothing and therefore desires anything she can get. In one of Modern Times’ less famous, but most important scenes, the two imagine life as a married couple with a little home in the countryside. The Tramp returns from his day of work. He’s hungry for a snack, so he picks an apple from a tree that’s poking its branches through the living room window. The Gamin, looking pretty, asks him for a pitcher of milk; he turns to the kitchen door and there’s the cow. This fantasy, despite its naturalistic elements, is only a wholesome variation on the feeding machine that pie-faced the Tramp before. Chaplin’s point is that money alone cannot heal these two, because it would not change their attitudes along with their bank balance.

There’s nothing dreamy about the house they eventually find: a ditch-side shack on the outskirts of the city. There’s no mountains in the distance, only smokestacks; when the Tramp sits down to dinner, his chair collapses—we think, until we realize it’s the floor that’s given way. The Gamin serves him stolen food. Luckily, the factory’s hiring.

The Tramp gets a job maintaining the very machines that once fed him through their gears. His superior, an old mechanic, becomes trapped in one of the largest machines, with only his head sticking out. The Tramp moves to save him, then breaks for lunch. Frighteningly, the mechanic doesn’t ask him to stop eating—he just asks him to bring the mechanic’s own lunch over and feed it to him. Break over, they go on strike and the plant closes.

Modern Times’ final act is one of its best known, though not for reasons necessary to the plot. Here’s the backstory: a café owner discovers the Gamin dancing in the street and offers her a job as a performer in his establishment. She accepts and becomes very popular. She gets the Tramp a job there, too, as a singing waiter.

Chaplin was famously conflicted about having the Tramp speak for the first time; he feared it would destroy the character’s appeal. He even went so far as to script Modern Times as a talking picture, complete with dialogue for the Tramp, but later abandoned it. In this one scene, however, the Tramp’s voice is heard. He sings a ‘nonsense song’—an variation of Je cherche après Titine. His act is a hit, but the Gamin’s criminal past soon puts them on the run again. And so it goes.

There’s no solutions in Modern Times—just observations. The first is that efficiency demands organization, then repetition, then rigidity. The second is that people are machines if they act like them. The Tramp is jostled, squeezed and misdirected through the café crowd just as he was through the factory’s equipment. The riots he causes seem automatic—they occur as easily as if he’d leaned back on a switch he didn’t see. He’s hired, fired, imprisoned, freed and hired again, good as new and never the wiser. 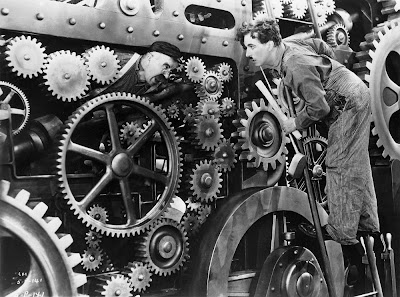 Still, this isn’t a cynical film. Chaplin may not guarantee happiness for the Tramp and Gamin, but they are individuals, and willingly so, and that gives us hope. They must change, so they do. If everyone around them did the same, the end-of-the-line might not be such a bad thing.

Where to find Modern Times:
French distributor MK2 owns the rights to most of Charlie Chaplin’s later works, distributed in North America by Warner Brothers. My copy of Modern Times is among them. This version includes a second disk with substantial archival materials, deleted scenes and a pair of documentaries about Modern Times’ production and Chaplin’s own evolving views on economics and human nature. And lots else. Look for it here: