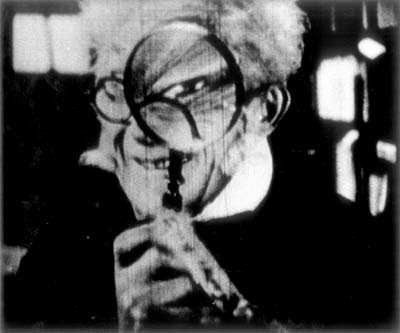 When last we saw Kay Hoog (millionaire adventurer, courageous hunk), he’d been beset with tragedy. Having escaped an ancient Incan city by the skin of his gleaming teeth, Hoog looked forward to a few years of settled life with his (amicably) captured Incan lovely, Naela. But the past struck quickly. Hoog’s arch-nemesis, the homicidal femme Lio Sha, murdered Naela on the very grounds of Hoog’s estate, prompting him to swear revenge upon her and her criminal organization, the Spiders. Now he must find them, as the Spiders continue their global quest for the Buddha-head Diamond. The head, it’s said, has the power to restore Asia to world dominance. 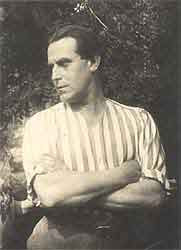 Not a pleasant thought for a handsome colonial like Kay Hoog. He gets right to work, revealing to his servant that he has, in fact, located the Spiders’ North American hideout. He plans his attack, described by the following intertitle as ‘A Modern Raid.’ And modern it is—Hoog leaps (not parachutes) from the rear cockpit of a biplane, landing on the roof of the Spiders’ building.

There must be easier (and safer) ways to scale a building, especially one surrounded by other buildings, but we’ll leave that criticism to the bean counters with no bravado. Hoog is a man of action. Leading a small army of agents, he storms the headquarters and does battle with Chinese [sic] swordsmen against a background of Oriental [sic] screens and riveted steel walls. Lio Sha and her associates flee via hidden elevator, and the pursuing Hoog is nearly sandwiched in a booby-trapped room. Though he hasn’t exactly exacted his vengeance yet, he does find a small piece of ivory, inscribed with mysterious script, that might bring clues to the Spiders’ next move. So Hoog brings this item to ‘an old bookworm’ who specializes in ancient languages. 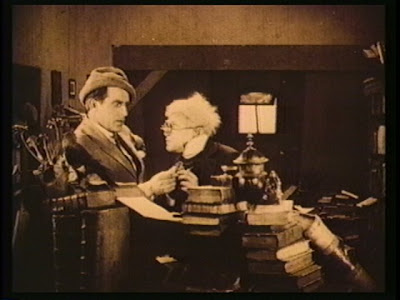 It is an item of interest, alright. The bookworm explains:

“This is proof of my suspicions. Under the Chinese quarter exists a secret Chinese city. This piece of ivory is the entrance key...

...but beware. The Police will give you no protection in the Chinese quarter, let alone in the subterranean city. Remember—they deny it even exits!”

Indeed. If we’ve learned one thing from The Spiders thus far, it’s that everything mundane has something fantastic within, behind or beneath it. Lio Sha, we know, hides nothing in plain sight, preferring to conceal her valuables in motorized, sliding drawers. So it’s only appropriate that a whole community may be bustling beneath the feet of everyday San Franciscans. Hoog easily finds the entry point to the secret city (it’s a trapdoor), passes through a tunnel guarded by traditional-looking robed fellows with heavy blades—and tigers—and begins to search the city. This subterranean civilization doesn’t look much different from a Chinatown market, actually—assuming you could locate one in a cave. Hoog eventually takes a breather in an opium den, though he doesn’t inhale.

Gunfights ensue. Hoog is captured, nearly drowns, then completely escapes. Lio Sha, meanwhile, sets sail aboard the good ship Storm Bird headed in the general direction of the diamond. Hoog is stows away on the same vessel, having smuggled himself inside a large crate equipped with bookshelf, reading lamp and a hook to hang his gun.

The Storm Bird soon turns around. Another contingent of Spiders, led by a spindly figure called All-Hab-Mah, or The Master (Friedrich Kühne), has discovered that the diamond’s whereabouts are, in fact, known only to the descendant of the pirate who stole it. That descendant still makes his living appraising jewels. He is a Londoner, John Terry (Rudolph Lettinger). Terry lives with his only daughter, Ellen (Thea Zander). Ellen is destined to be Hoog’s next true love, since she possesses the two traits he values most in a girl: beauty and obliviousness.

Lio Sha and her minions invade Terry’s home, and even crack his safe, but find no jewel. They take Ellen instead. It turns out Terry has never heard of the Buddha-head Diamond at all, though when he enlists the help of Kay Hoog, the facts quickly fall into place. Terry maintains a painting of his imposing pirate ancestor over the fireplace. Within the painting is a map of the Falkland Islands. This map, combined with the pirate’s log book, states quite clearly where the diamond must have been stashed. However, the book is coy about why, after hiding the diamond, the pirate was the only one to escape the site alive.

A lesser man would stop to ponder this. Not Kay Hoog. He sets off for the Falklands. Unfortunately for him, Terry’s butler, a spy, manages to inform Lio Sha—via carrier pigeon—to follow him. Lio Sha and her men capture Hoog again, this time amidst the pirate’s loot, deep underground. “Hunger and thirst will make you talk,” promises Lio Sha.

Poor Lio Sha. She doesn’t know about the poisonous crater nearby. The one that spews deadly fumes which overcome anyone foolish enough to follow the pirates. Hell, it probably killed the pirates, first. The Spiders' film-stock tints delightfully red as the criminals gasp their last breaths and Hoog, once again, survives. Lio Sha does not. She’s the one we’ll miss most, we sigh. 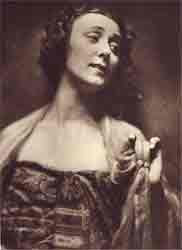 The Spiders now careens toward its ending. The Master, it’s discovered, has returned to England with Ellen in tow. He is desperate. His hypnotic analysis of Ellen has revealed that she knows absolutely nothing. He fears that the Spiders’ Asian Committee will think him a double agent, since he still has produced no jewel. The Master plans to solve this by getting a fake jewel cut in Amsterdam, but he never gets the chance to try. He is instead assassinated by Sikh operatives (part of the Asian Committee apparently); the Sikhs, in turn, are finished off by Hoog.

Well, what about Ellen Terry? She’ll be alright, a doctor tells us. In fact, she’ll soon awaken with no memory of the ordeal whatsoever. And so Hoog finishes the film with vengeance met, the Buddha-head Diamond in his pocket, the gratitude of several millionaires, and the love of a vacuous babe with no emotional baggage. Not a bad for a few weeks’ work.

Hey, The Spiders is fun. Here you’ve got action-adventure done in a silent, somewhat serious format, very different from the more famous (but not always better) work done by Douglas Fairbanks around the same time. If you’re feeling analytical, you can pick up on themes typical of director Fritz Lang’s later work: science fiction, hypnosis, disguise, the occult, exotic underworlds, cities within cities, cultural decay and persecution. And if you just want to sit with your popcorn tub and forgo deep thought, The Spiders still delivers.