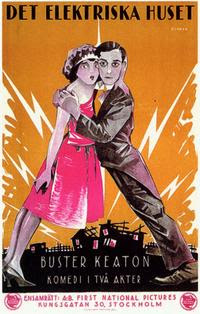 Brief entry this time, as it's the late hours of a long day before a short night.
Why was my day long? I won't bore you with that. See, I'm not a big believer in confessional blogging, or its banal cousin, the Daily Update. I don't think I'm talented enough to make my average day sound intriguing, and if I was, I hope I'd be too busy to do the blogging.
In brief: My day would have been easier if I did not have to search for things I wanted. That's life, of course. But the challenge with a Silent Volume Reflections post is linking 'life' to silent movies, which most people associate with 'dead.'
Well, here it is twenty minutes ago, and I'm pretty much drawing a blank. Then I think, 'what was notable about my day? What daily dose of nutrient-rich, metaphorical topsoil can I trowel up into the pot of my imagination?'--You can tell I was tired. The answer was 'Nothing, because I didn't do anything meaningful. I just laboured, and that ate my time.'
And then I thought, 'what silent movie does that remind me of?' And then I thought, 'The Electric House (1922)!'
It's a short film by Buster Keaton (one of many). The premise seemed appropriate: two bachelors share a small house, which they've rigged with a series of labour-saving pullies and levers to minimize or eliminate most chores, and in fact, most movement. This is Classic Male Behaviour and I could totally relate. I mean, I didn't feel like posting anything tonight, so I planned to latch on to this film as a subject, then milk it for 300 words or so. Then eat a Peak Frean.
In a slapstick comedy, the pullies prove deadly. If you read this blog regularly, you know that I introduce my topics with a picture. In this case, it would appropriately be a picture of The Electric House. I had one in mind... the one scene people always post when they talk about that film... the shot of Buster and his housemate sitting at opposite ends of the dinner table, with the salt and pepper shakers dangling over them... why couldn't I find it?
Google Images failed me, though only, very, slowly. Ten screens along and no dinner table. At a loss, I Wiki'd Buster, and that's when I realized I'd been searching the wrong title altogether. See, The Scarecrow (1920) is about a pair of guys in a house full of labour-saving, makeshift gadgets; The Electric House places Buster in a mansion that has been substantially (but not expertly) automated, leading to potentially lethal consequences. Hey it could happen to anyone.
There is no point here, except possibly this: your expertise is only as good as your memory. And since mine ain't so hot tonight, the result was extra time spent trying to save time, followed by a confessional blog about not writing confessional blogs. That is all. Now to the cookie. 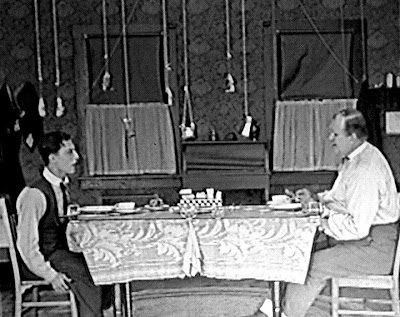