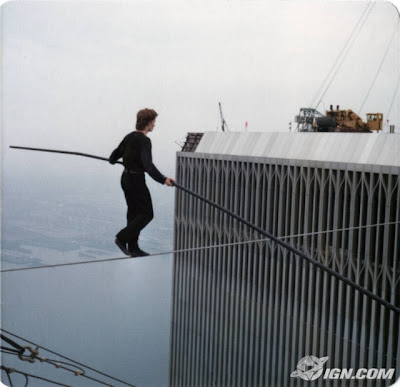 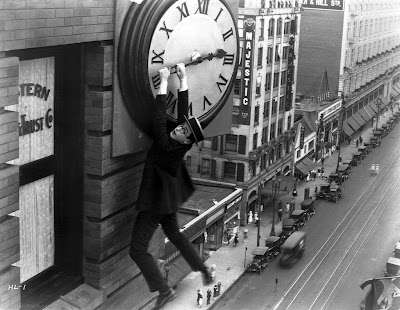 Philippe Petit once said the Twin Towers were built so he could conquer them. And so he did, crossing from one rooftop to the other on his high-wire, eight times, in 1974. Man on Wire chronicles this stunt, and the months of careful planning that preceded it. The film introduces Petit as a talented man and a positive thinker. He's also committed to this act so completely that every conseqence, both mortal and legal, both for himself and others, fades in the intensity of his focus.
This is a documentary of a caper, but all of it builds to a great performance, and even on a TV screen, it awes. As Petit explains, the real danger was not the height, but the wind--after all, when you're that high up, what's a few dozen more storeys?
Documentaries don't invite comparisons to comedies, especially slapstick ones. Indeed, Harold Lloyd's 'Boy' (otherwise unnamed) is utterly unlike Philippe Petit. He's an average man with no love for heights. His only goal in life is to make good in the big city, and not for his own satisfaction, but rather, to earn the heart of his beloved back home. It's only through a series of serious missteps that he finds it necessary to climb from the street to the roof of an office building, and his terror grows with each foot. But Safety Last, like Man on Wire, can scare you a little. Yeah, it's fiction; yeah, it's Hollywood; but in the silent period, you did your own stunts. And while Lloyd wasn't really a hundred feet in the air when he dangled from that clock, he was high enough to get killed if he fell. Knowing this, you wonder who's crazier--the busker, or the millionaire comedian?
Posted by Chris Edwards at 10:06 AM