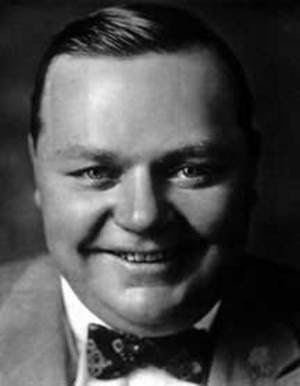 What could have been.

‘Fatty’ (actually, it was Roscoe) Arbuckle ought to have been the third titan of silent slapstick comedy. He should have made legendary, feature-length films throughout the 1920s, standing eye-level—for all time—with Charlie Chaplin (with whom he worked) and Buster Keaton (whom he worked with and mentored). Instead, his career was destroyed by trumped-up sex scandal, just as he’d begun to pursue a longer, more complex form of art. Arbuckle’s ruin is a depressing story that showcases humans at their worst; I don’t want to write about it. But you can read about it here.

Anyway, we have his short films. A considerable number, in fact. Arbuckle was a dominant star of the 1910s and produced more than 150 films between 1909 and 1921. He made Coney Island in 1917. Like so many of his other movies, it still works—not so much as a piece of art, but as a bunch of damned funny routines. I could have picked several other standout Arbuckle shorts to write about today: Fatty Joins the Force (1913); The Rounders (1914); That Little Band of Gold (1915); and Fatty and Mabel at the San Diego Exposition (1915) are just as terrific. I chose Coney Island because it sums up Arbuckle so well. The man had many talents, and this 25-minute short draws upon all of them.

Coney Island stars not only Arbuckle, but also his nephew, comic acrobat Al St. John, and a very young Buster Keaton. The plot is basic: Arbuckle escapes the watch of his domineering wife (Agnes Neilson) and heads for Coney Island. Keaton arrives that same day with his attractive, and rather easy, girlfriend (we’ll call her Alice, since that was the actor’s name); Alice is immediately stolen from him by St. John, who in turn loses her to Arbuckle. Arbuckle and St. John end up incarcerated, though not for good. 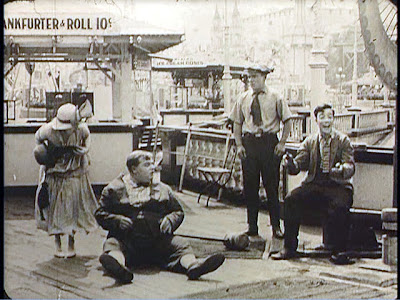 The delivery’s the thing. Arbuckle ‘got’ film acting earlier and more completely than most comedians; his outrageous gags (he once threw a piano through a wall to hit someone) are always tempered with equally funny, subtle gestures. Consider Arbuckle’s first scene in Coney Island. He’s on the beach with his wife, very much wishing he were not. He keeps turning from her and she keeps pulling him back by the seat of his pants. There’s no exaggeration here, but we know what he thinks of her. And with her eyes on her magazine rather than him, all the communication is really between Arbuckle and us. Have a look at this clip, from 1:10 to 1:40.

The great silent comedians all connected with their audiences in different ways. Chaplin mixed his comedy with pathos; Keaton reflected our need for restraint in the face of chaos; Harold Lloyd tried to be average. But Arbuckle engaged the audience directly. The others we watch; with Arbuckle, you often feel as though you’re in on whatever scheme he’s hatched. Move the previous clip ahead to 1:45 and he’ll tell you all about his plot to escape the wife.

Arbuckle’s characters tended toward scoundrel-hood. He was very good at playing cheating, boozing no-accounts with cowardly hearts; all of whom suffered greatly over the course of 20 minutes or so. He takes several beatings in Coney Island—from his wife, police officers and from Keaton (with a sledgehammer). He’s nearly drowned by St. John. But Arbuckle also clobbers a lot of people in his films, because compared to most comic actors, he was very large.

Keaton and Chaplin were lightly-built men. While they sometimes played unethical characters, they could never play bullies. Both used large actors as foils and were often thumped by them. Not Arbuckle. He was a convincing brawler, even thuggish; when he went down it meant something and due to his unusual acrobatic skill, it looked good too. Watch him slug (then dropkick) Al St. John at 2:06.

Arbuckle’s egg-shape added another dimension to his comedy. Only he could play the oversized farmhand or the glutton; and naturally, any gag related to weight worked best with him. One of Coney Island’s strongest bits begins when Fatty is unable to rent a swimsuit in his size. He spies an enormous woman laying out her own swimsuit before heading into the powder room. He steals it and spends the remainder of the film in various states of drag.

Female Fatty is less grotesque than she sounds, though not because Arbuckle’s an attractive cross-dresser. He knew how to move like a woman, and the result is simply an obese and very homely lady, not a bulbous man squeezed into a swimming skirt. Have a glimpse, at 2:08.

An overweight man with grace is really a joke in itself. Arbuckle’s physicality made him funny down to his last fibre, and funny in ways no one else of his stature could be. Rather than saying more about the film (the conclusion of which, naturally, teaches Arbuckle nothing), I’ll leave you with an example of what I mean, starting at 3:05. Among all the great gags in Coney Island, this is the one I’ve remembered best.

A fat man in a dress, swimming beluga-like to escape his nemesis. No one but Arbuckle could’ve pulled that off. 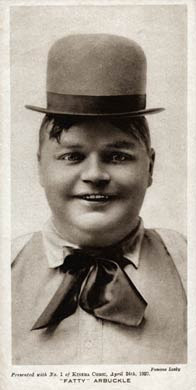 Where to find Coney Island:
Well, you could watch it on YouTube, but it’s pretty blurry. Better to brandish your rental card and pick up the phenomenal, fantastic, Forgotten Films of Roscoe “Fatty” Arbuckle, a four-disc set that includes more than 20 of the comedian’s silent shorts, plus several films he directed (under the pseudonym ‘William Goodrich’) following his blacklisting. The set is distributed by Mackinac Media.

Some of Arbuckle’s work can also be found on Kino International’s Arbuckle & Keaton, Vols. One and Two.
Posted by Chris Edwards at 7:27 PM