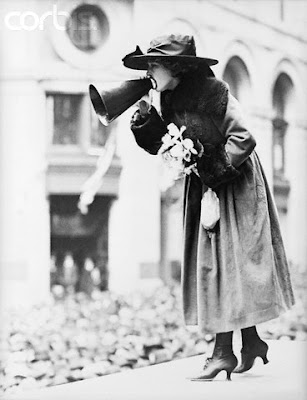 When I started this blog, I figured most people understood silent movies—they just didn’t want to watch one. But, in shamelessly promoting my blog to others, I’ve discovered that in fact, a lot of them aren’t clear about what distinguishes silent films from talkies. Some of them confuse ‘silent’ with ‘soundless,’ and to be honest, I wouldn’t want to watch a soundless movie either. No matter how well it was shot.

This is a good thing! It gives me hope, because it can be rectified. Step One is to correct the misunderstandings. Step Two is to shamelessly promote my weekend blogs to give people examples of films they should check out for themselves. Let’s spend this blog entry (and several more mid-week blogs) dealing with Step One.

(P.V., this series is dedicated to you):

Misconception #1: Silent films have no sound

I think it’s more accurate to say ‘silent film has no soundtrack.’ If you were to play an authentic silent movie reel on your (I guess, authentic) old projector, you’d get a film without any sound. However, no one, almost ever, presented movies this way.

Soundtracks, in the literal sense, are components of the film stock itself. Prior to their development, there were only two ways to add music, voices or others sounds to a movie. The first was live accompaniment—usually musicians, such as a pianist, or live actors speaking essential dialogue on behalf of the actors on-screen. Piano accompaniment was common throughout the silent period (about 1890 to 1930) and grew to be a real art form, as the lone pianist had to play a consistent score (or set of leitmotifs) while still capturing the changing tones and tensions a movie’s plot presented.

The only other way to add sound to a silent movie was to synchronize the film’s projection with another machine which provided the sound. This required great precision, because even the slightest lag between the image of an actor speaking and the sound of his or her voice is highly distracting.

Synchronization was tried from the start and stymied the best—including Thomas Edison, who was an early film producer, among many other things. Wax cylinders, records and other early recording media were fragile, wore out quickly and could be easily jarred, causing them to skip. When the latter happened, projectionists either had to stop the film to adjust the sound, or carry on with sounds and images annoyingly out-of-sync.

Synchronized sound got a lot more reliable by the late-1920s; for example, The Man Who Laughs (1928) was presented with an accompanying recording of sound effects, background voices and even a love song—see my essay here: http://silent-volume.blogspot.com/2009_01_18_archive.html.

But this was near the end of the silent era anyway.

Here’s the good news: Today, silent films are available on DVD with soundtracks built right in. Often, the soundtrack is based on an authentic score composed for the film years ago. Other times, it is a modern interpretation, or even a score deliberately at odds with the original. The results can be intriguing. A few high-end DVDs, such as Criterion’s version of Pandora’s Box (1929), offer you the choice of several scores. I reviewed that DVD here:

And so dies one misconception. More carnage to come.

Posted by Chris Edwards at 6:59 PM