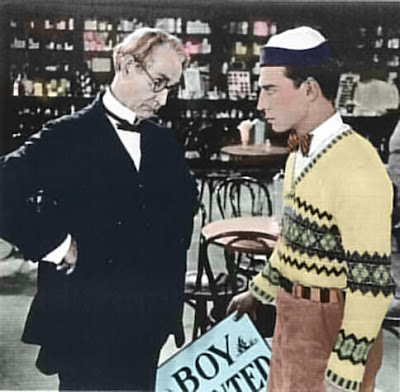 Here’s one of Buster Keaton’s least praised silent features. College gets (and maybe earns) little elbow room next to The Navigator (1924) or The General (1926) or several of Keaton’s other films. To love it is to love a bunch of scenes that support only themselves. Reshuffle them and the plot would still hold—as would Keaton’s character, Ronald, who doesn’t so much develop as change direction.

But these facts only keep College (1927) from being a great Keaton film. It is still a set of brilliant routines, and if it’s mediocre by Keaton’s standards, at least he knew it. In fact, because he knew it, College manages a fascinating turn. What begins as a gag flick becomes, in the third act, Keaton’s greatest inside joke.

College opens on the day of Ronald’s high school graduation, at which he’s to give the valedictory address. The weather is wet; Ronald arrives late and takes the last chair in the graduation hall, in front of a radiator. This sets up the movie’s first big gag, as the radiator’s heat causes Ronald’s soaked suit to shrink. He is called to receive his diploma and makes a rambling speech about the evils of athletics while his waistcoat bursts its buttons. No one but his mother stays seated; not even his friend Mary (Anne Cornwall).

Outside, Mary charges straight at Ronald. “Your speech was ridiculous,” the intertitle snaps. “Anyone prefers an athlete to a weak-knee’d teachers’ pet.” Mary goes on: “When you change your mind about athletics, I’ll change my mind about you.” Then she drives away with Jeff, the school’s idiot jock.
Ronald is crushed. Like most Keaton heroes, he’s fallen for a woman who cannot love him unless he changes. Her demand becomes his call-to-action: Ronald resolves to earn Mary’s love by embracing sport. To do this, he must follow her (and Jeff) to Clayton College in the fall.

Cue next fall: Ronald arrives at Clayton carrying a thick suitcase. From it he unpacks football pads, cleats, a full baseball uniform, a catcher’s chest protector, ‘how to’ guides to various sports and a photograph of Mary. Clearly, Ronald’s studies have shifted over the summer. None of the gear looks used.

Now College takes a detour, as Ronald becomes a campus soda jerk. We first see the senior jerk, lobbing scoops of ice cream and sliding glasses down the bar with smooth ease. Ronald follows his pattern exactly, but always a half-second behind. Ronald’s scoops hit the floor, not the shaker; his drinks slide past one customer and into the lap of another. It’s all so precisely—perfectly—wrong.

Jobs alternate with athletic tryouts. In the next scene, Ronald is nearly killed trying to make the Clayton baseball team. Following that, he loses his restaurant job after spilling soup on his left cheek, revealing blackface makeup. (The black restaurateur is not amused). Then it’s on to track and field, where Ronald makes himself a whirling threat at hammer throw and snaps his vaulting pole upon ascent. Earnest though he may be, Ronald’s no athlete. 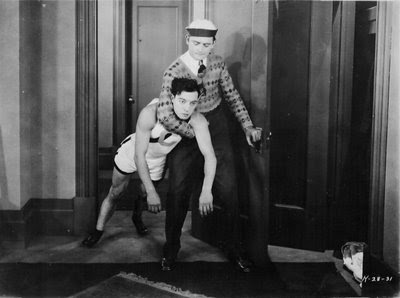 Ronald’s no athlete? We accept this because College demands it, but what are we seeing here? When Ronald finishes the hurdles by toppling over each one with the tip of his shoe, at the height of his leap, we’re just impressed. A real klutz would crash through them all.

The track scene transforms College. Until now, we’ve seen Ronald in suits and uniforms, always full-length and long-sleeved. Now he’s wearing only a tank top and shorts, and the illusion is shot: Keaton’s body is compact and fat-free; every muscle is toned and perfect in its place. The bookworm is an acrobat; ‘Ronald’ is a poor disguise. We give up on him, content to watch Buster perform.

The movie fights back. It loads the third act with more plot than the first two combined. First, Ronald joins the Clayton rowing team as a coxswain (a position that uses his brain and ignores his coordination). Then, on the day of the race, Jeff bursts into Mary’s dorm room and announces he’s been expelled. Knowing that Mary, too, can be expelled if caught with a man in her room, Jeff locks himself in. Apparently, this will encourage her to marry him.

Ronald’s boat is victorious. He returns to the locker room, alone. The phone rings. It’s Mary, who has somehow distracted Jeff and called the locker room in hope of reaching Ronald. Her success is too much of a longshot, but hey, we’re not going to root for the rapist. It also allows Keaton to deliver the film’s last major gag, and it’s a doozey.

Ronald becomes a superhero. He sprints to Mary’s dorm like an Olympian, hurdling shrubs, long-jumping pondwater and pole-vaulting (with a wooden post) through her second-storey window. He levels Jeff with a dish thrown like a discus and tackles him until he flees. It’s an electric scene, and it makes no sense.

Well, it makes sense if it’s Buster Keaton we’re watching, not Ronald. We knew Buster could do that stuff all the time. 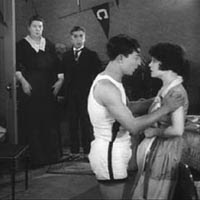 Keaton cheats us here. It’s one thing to believe in the power of love, but we never saw Ronald improve at any of these sports before now, much less master them. We’ve been had, and the movie owes us one. Fortunately, it delivers; following this miracle-scene with one of Keaton's best endings.
College, for all its flaws, is a rare gem: a comedy that gets funnier when you laugh with it, not at it. Poor Roland is dead, but who can speak ill of him now?

Where to find College:
My copy of College is part of Kino International’s ‘The Art of Buster Keaton’ box set, which is widely available. Unfortunately, the set’s selling point is completeness, not extras. This DVD includes three of Keaton’s short films: Hard Luck, The Blacksmith (both 1921), and The Electric House (1922). Look for it here.
Posted by Chris Edwards at 12:08 PM