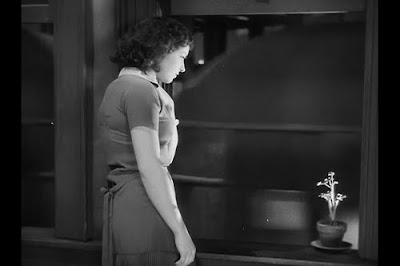 Director F.W. Murnau made three movies for Fox Film Corporation near the end of his life; of them, Sunrise (1927) is best-known today, while 4 Devils (1928) is presumed lost. The last, City Girl, is rarely seen. This is a shame. City Girl may be imperfect, but it’s also a remarkable example of Murnau’s wit and artistry. Watch this film and see him turn an uninspired love story into a battle between two terrible, powerful characters.

City Girl concerns an innocent farmboy, Lem Tustine (Charles Farrell), who meets a waitress named Kate (Mary Duncan) during a trip to Chicago to sell his family’s wheat. They fall in love, marry, and return to Minnesota as a couple. Waiting for them is Lem’s menacing father (David Torrence), who brutally rejects the marriage, and Lem’s mother (Edith Yorke), who passively accepts it. Conflicts build and boil over until a hailstorm threatens the rest of the crop.

Two young, attractive people from different worlds meet, face adversity and survive it, thanks to the power of love. City Girl sounds like a romance. Yet it’s not romantic at all, because these lovers are not equals. Kate is strong, smart, driven; her dreaminess weakens her, but she tempers it with cold assessment. She makes use of her beauty, but is not satisfied to rely on it. She works hard. Lem? He’s just dumb and pretty. He approaches Chicago like the bewildered rube he is, overwrapped in his wool suit and fixating on a slip of paper listing the prices his father demands. This is no rural caricature, either. Lem remains a vacant beefcake when he gets back to the farm, dressed in overalls that never get dirty, moping a lot and rarely working.

Kate’s also a bit too gorgeous for the life she leads, but her personality makes up for it. She’s all motion and attitude, navigating a job that seems almost mechanized. The diner is hot and crowded; patrons shove their way to the counter to eat and as one gets up, another immediately takes his place. Outside, everywhere, the city overflows with people. Kate’s only free space is her miserable bachelor apartment.

Lem looks awfully handsome next to the scummy customers Kate serves every day. It’s easy, on a shallow level, to understand her attraction to him. It’s still easy (and still shallow) to understand why his lack of sophistication draws her deeper. She wants out of her life. She stares longingly at paintings and posters depicting rural paradise. Lem sums up every one of her fantasies, almost to the point of parody. Given what an unsubtle object he is, we can’t blame her for saying yes to his proposal.

Of course, trouble awaits them. Murnau prefigures the tension with a series of linked images in the first act. Mr. Tustine slices a loaf of bread, which fades into a multi-slice, automatic toaster at Kate’s diner. Mrs. Tustine’s steaming washbasin transforms into several steaming coffee urns. Early farm scenes feature three people at most, then cut to city scenes bulging with dozens, and even hundreds of extras. The dichotomies seem obvious, right down to Lem’s hick and Kate’s streetwise city-slicker. However, the city disappears for good once Kate arrives in Minnesota and meets Lem's father.
Mr. Tustine is the real thing, and everything Lem is not: Ruthless, dominating, serious; clawed, bitten and weathered from years of work. In one of his first scenes, he berated his young daughter for playing with a stem of wheat. “I raise wheat to sell, not to play with,” the intertitle reads. “Every grain counts!” Then he snatched the plant and placed it in the family bible. Here’s a clip, starting at 5:15.
Mr. Tustine is the true match (and foil) for Kate. They collide instantly, even violently, leaving Lem paralyzed. He can only fail these two—first by selling the wheat at a loss, then by refusing to stand up for his wife. As Kate and Mr. Tustine continue to battle, we begin to see how Chicago—so machine-like in the way it drives its citizens from A to B—is not so different from rural Minnesota. The machine is still everywhere. Trains drive Lem to and from the city. An enormous combine processes the wheat, dictating the movements of a dozen men. The Tustine’s barometer appears many times, warning the farmers of impending storms; once we see it between Kate and Lem as they argue.

City Girl’s true message is that conflicts are between people, not places or lifestyles. Transplanted into her new world, Kate remains a waitress, serving food to the farmhands who leer at her, like the guys at the diner did. Mr. Tustine’s disapproval is so severe that she must live in a tiny room, alone, just as she did in the city. We laugh at her dream of having a “real two-fisted guy” to take care of her, since she’s not passive enough to make that kind of marriage work. If her marriage reflects the elder Tustine’s, she must be the husband.

Murnau states this clearly in a brilliant scene, late in the film. Kate, now estranged from almost everyone, including Lem, has just driven an amorous farmhand out of her room. She hunkers down in fear and desperation. Light shines through her window and the frame reflects a cross in shadow next to her—the same cross we see on Mr. Tustine’s family bible. Lem arrives and pounds on her door; she does not open it. He crumples, and the light of the oil lamp projects his mother’s rocking chair in shadow next to him. 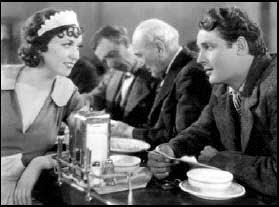 City Girl doesn’t end convincingly. We suspect that the hatchet is not buried that deep between Kate and her father-in-law, especially if their relationship is based on mutual love for Lem. Lem’s appeal could never be more than biological for these two powerhouses—for Kate, it would come down to sex; for Mr. Tustine, the familial bond. But maybe they’re smart enough to make it work. City Girl closes with Kate and Mr. Tustine riding off together in his wagon. Lem is left behind to close the gate.

(Trivia: City Girl was a title favoured by Fox; Murnau preferred Our Daily Bread. Even in post-production, the conflict between Kate and Mr. Tustine went on.)

Where to find City Girl:
City Girl was recently released as part of 20th Century Fox’s box set, Murnau, Bozage and Fox. The City Girl disk includes a thorough reconstruction of the lost 4 Devils, based on publicity stills, blueprints, sketches, and the original script. Here’s the link.
Posted by Chris Edwards at 10:14 PM