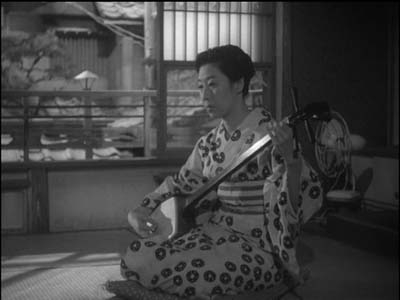 Money, and how to get it, is the ongoing concern in Flowing, Mikio Naruse’s tale of down-and-out geishas in mid-century Tokyo. Otsuta’s geisha dwelling, Tsuta House, is deep in debt, and it’s her fault: the result of her love-affair with a man who took more than he gave. But Tsuta House still survives, and that, too, is thanks to Otsuta (Isuzu Yamada), whose fame, beauty, and mastery of traditional geisha arts continue to draw customers to her business.


Time, though, is not on Otsuta’s side. Despite her youthful looks, she is pushing forty, and her intricate, mannered approach to paid companionship is giving way to something less formal. ‘People today don’t care about these things,” she says, again and again, about various components of her profession: The singing, the dancing, the instrumental music (Otsuta is a virtuoso shamisen player)—all of these things seem to get in the way of what today’s customer is in a hurry to buy. Otsuta is old-fashioned.

But she is not alone. Flowing, quite wonderfully, introduces us to one of the most idiosyncratic households you’ll ever find: one occupied and run entirely by women of varying ages, outlooks and temperaments. Occupants of Tsuta House include Otsuta’s daughter, Katsuyo (Hideko Takamine); her younger sister, Yoneko (Chieko Nakakita); Yoneko’s daughter; geishas Someka (Haruko Sugimura) and Nanako (Mariko Okada); and Oharu (Kinuyo Tanaka), a 45-year old new arrival who works as a live-in maid. Otsuta’s elder sister, Otoyo (Natsuko Kahara), is a frequent visitor.

Because Tsuta House is both a home and a place of business, and because of the nature of their work, and their declining circumstances, these women have relationships unlike those you’d find in a regular family. Natural points of distinction fall away. Katsuyo, for example, is more level-headed and serious than her own mother; her aunt Yoneko, a fragile personality, defers to her. Someka and Nanako, though at least 30 years apart, seem equally immature. Otoyo loans money to Otsuta, but charges her interest, which is not a very sisterly thing to do. Oharu, though indispensible, defers to everyone as though she cannot be trusted at all. 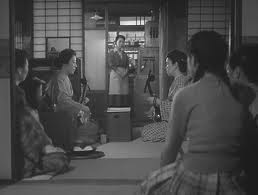 Keeping all this straight is easier than you'd think. A lot of the credit goes to the actresses, who paint their characters with vivid colour—particularly Yamada, who plays a woman balancing many conflicting priorities. Sugimura, too, is memorable. You’ll recognize her from many of Yasujiro Ozu’s films, but Ozu usually cast her in taciturn parts--here she’s just hilarious. Her Someko is a Kramer-like figure: always around, always broke, never clearly contributing anything besides laughs. 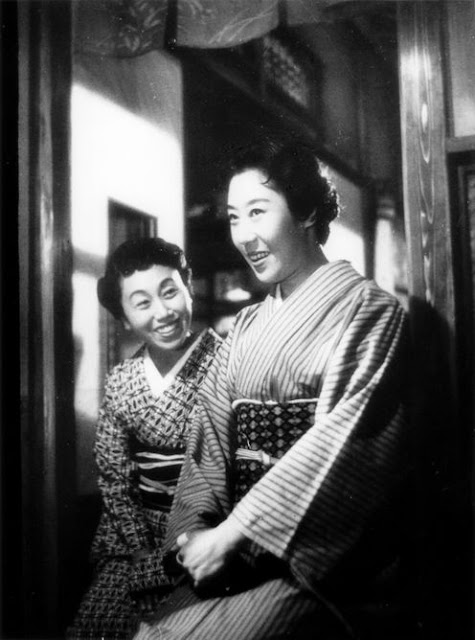 The actresses must have felt challenged to define themselves in a script that allowed them so little screen time to themselves. The first half of Flowing is a near-unbroken chain of dialogue scenes—characters are built entirely through their interactions with others. In some films this would get tiresome, but here it seems right. What these women mean to each other, personally and professionally, is what matters most.

And the men? Oh, there’s a few hanging around. One, a boor from the sticks, threatens to sue Otsuta over money owed to his sister, a former employee. Another, Yoneko’s husband, drops in briefly... to see his daughter. Later, Otsuta goes on an awkward date with an older man with a good portfolio and bad teeth.

Other men are defined by their absence. Nanko complains about a client who has become too cheap; Oharu’s husband and son, we learn, are both dead. And so on. They’re an uninspiring bunch, and you get the feeling that Otsuta would rather go broke than rely on any of them. 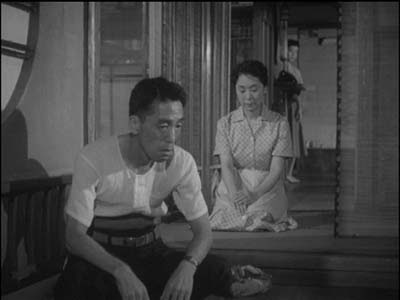 But of course, that’s not an option. And the elimination of Otsuta’s options is what this story is really about, though you may find Flowing more memorable as a collection of character studies than for its plot. The film is almost Ozu-like in its depiction of people progressing through life as they must. If you finish it certain of Otsuta’s fate, chances are you felt the same way at the start. 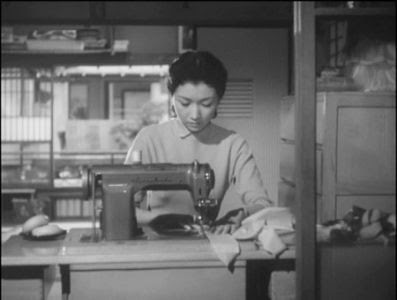 Consider that a recommendation. Otsuta, to me, is a character worth pondering for a lot more than two hours: An idealist who chose the most cynical of businesses in which to make her living. Romantic love destroyed her financially, but she insists upon it, or at least the trappings of it; pure sex would be her salvation, but she resists it. We might say she’s too good for this line of work, but for Otsuta, the work has always been good. It’s the people that went bad.

Where to see Flowing:
Flowing (Nagareru) will screen at Toronto’s TIFF Bell Lightbox on Friday, March 29, 2013; part of the retrospective Japanese Divas: The GreatActresses of Japanese Cinema’s Golden Age.
Posted by Chris Edwards at 10:46 AM