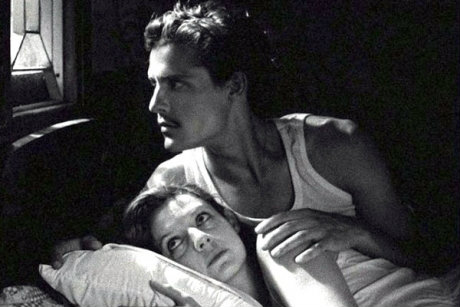 Tabu is two films, linked by memory. Or maybe fantasy. The two people doing the remembering are elderly, and in one case, demented; the past they recall is fogged by years and distorted, perhaps, by guilt and grief. But it is theirs. They own it. In the present, they own very little.

Yesterday I heard director Miguel Gomes describe the two halves of his film as being “in opposition.” They are, in form and style, so different that I take his description literally. Part One of Tabu is set in the present day, in Lisbon; though filmed in black and white, it is a thoroughly modern-looking film about Pilar (Teresa Madruga); a Catholic woman of great social conscience, who frets for the well-being of her aged next-door neighbour, Aurora (Laura Soveral), and Aurora’s illiterate live-in housekeeper, Santa (Isabel Cardoso). 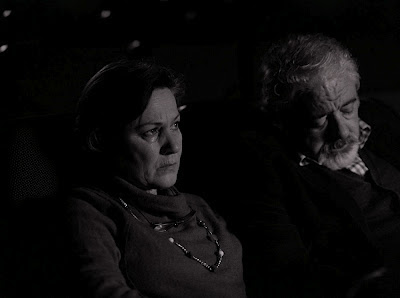 Part Two, also in black-and-white, is set in Colonial Africa, 50 years before. It follows a torrid love-affair between young Aurora (Ana Moreira) and Ventura (Carlotto Cotta), a scoundrel who loves her at least as much as her husband does, and whom she loves more than anyone else. Part Two sweeps away the foggy everyday of modern Lisbon for the expanse of the savannah; everything is sunny and wild. And, it is silent.

I don’t mean silent in the literal sense; I mean it in the sense that readers of this blog think of ‘silent’—a film in which people talk, are seen to talk, but no words are heard. There are plenty of sounds in Part Two. Lots of music; sounds of nature; we even hear Ventura’s voice on tape, as part of a song he sings with his band. But we never hear the lovers speak, we only see them.

I’ve watched a lot of films that mix the sound and silent aesthetic this way. Most of them were early-talkies—transitional films from around 1929 that were mostly silent, but included a sound sequence to cash in on the new craze. Most of these films don’t work, because going from sound to silence feels smothering. But Gomes maintains enough of a soundscape in Part Two that we don’t feel robbed. It is only the words he doesn’t want us to hear, not the rest of the world.

There are other silent touches. Ventura, a handsome drifter with a pencil-thin moustache, looks very much like a silent archetype of the man he really is. The film is shot in 4:3, a squarish frame dominant in the Silent Era. And of course, the film shares its title with F.W. Murnau’s famous quasi-documentary, Tabu (1931), though the connection is otherwise tenuous.

You may be surprised to learn that I liked Part One more. Madruga’s Pilar, a devout and lonely woman with firm convictions, who despairs at her inability to do even more good, seemed to me the kind of hero that the movies should highlight more. I’d gladly watch a whole film just about her. Her relationships with Aurora—failing, confused—and Santa—taciturn, undervalued, possibly resentful—are rich in emotional truth. Part Two, also good, interested me more as a technical exercise. I suspect that Gomes felt the same way.

Tabu is an easy recommendation for me, for many more reasons than its silence. This is a film I will remember—I predict—for many years. We’ll see, when I do revisit it, how it stands up to the memory I’ve built.