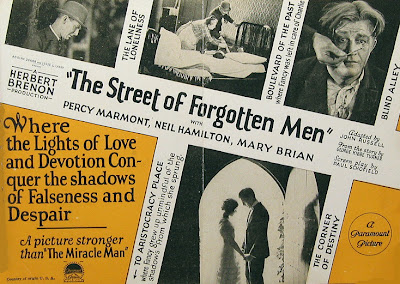 “The Street of Forgotten Men” is a romantic name for a dirty place. It’s one of several such names in the movie; some uglier, but all of them memorable: Diamond Mike’s; The Death House; The Cripple Factory. Sleazy dives and hideouts, every one. But granted a certain drama, thanks to their monikers.
The Forgotten Men are hustlers. Beggars, really—wandering the sidewalks of a city filled with unsympathetic regular folk, unwilling to part with their dimes. To survive, these men need gimmicks. They need to be dramatic. In the back room of Diamond Mike’s tavern, they’re given the means.
That’s where they find Adolphe, a master make-up artist and prop-man who garbs each Forgotten Man in the clothes and accessories of someone maimed or deformed. To one man, he gives a pair of crutches; binding his calves to the backs of his legs, then tucking them beneath a long overcoat. For another, he builds a hollow rolling cart, into which the hustler’s legs are hidden. Both these men now appear to have lost their legs below the knee. They’re now the kind of poor bastards you want to help out. Presumably, Adolphe gets a cut of their profits.
The Street of Forgotten Men concerns the best of these hustlers—a man who’s the best in more ways than one. “Good Time Charley” brings in more beggar’s coin than anyone else Adolphe works with, and he seems to be the old man’s favorite. Every day, Adolphe throws a tattered coat over Charley’s shoulders, wraps his left arm to his side, and affixes a phony stump over top. Then Charley does his part: doubling over his tall, lean, well-proportioned frame into a slouch, and shuffling out the door to earn his sympathy. 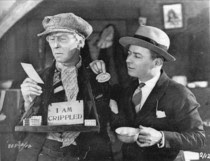 But he’s also a good man. Good enough that ‘Fancy’, a dying prostitute, entrusts him with the care of her infant daughter. He’ll take that charge seriously; buying a house in a quiet middle-class neighborhood and raising the girl with the help of an elderly live-in housekeeper (who, interestingly, he’d already hired). And he’ll continue his panhandling for the next 15 years or so, with the girl, Mary, never wising up.
The Street of Forgotten Men contains enough dark alleys and freakish costuming to be worthy of Lon Chaney’s attention (the director, Herbert Brenon, had helmed Peter Pan the year before). But Chaney’s men were often as twisted inside as they were outside; whereas Charley (Percy Marmont) isn’t twisted at all. Outside of his job (or inside it, depending on your point of view), he’s relentlessly, improbably normal. Perhaps he feels he needs to be?
Men like Charley seem to fascinate us today. He leads a double life much like Tony Soprano or Don Draper does: a comfortable, presentable domesticity on one side, and seediness on the other—a blurry world where one can only succeed by causing others to fail. To be the best in that world is to be measured in terms of profits made at others’ expense. Charley’s folly, like Tony’s and Don’s, is his belief that discipline and personal strength can hold these two worlds apart. Or perhaps he just misses the obvious: a decent man can’t do indecent work.
Charley lives well on his con-game. He wears fine suits and keeps his housekeeper and foster daughter warm and fed in a nice home. If he enjoys the venal pleasures of his working life, we don’t see it. But I think he must. Perhaps the con itself provides his high. Like a sex-addict, he lives for the exhilaration of the moment; then slinks back to his better life, disgusted.
At home, Mary (Mary Brian) plays the piano and awaits Charley’s return every day. She is innocent, credulous, and maybe not that bright—but she did grow up pretty. Her loyalty to Charley is total—it’s hard to believe he could do anything to turn her against him, even if he were totally candid. This proves to be a weakness of the film. When you set aside the weirdness of things for a moment, you realize there’s not much tension.
I found myself focusing, instead, on the tragedy of the Forgotten Men. Each one is smart enough to pull off his gimmick, so why aren’t they doing something better with their lives? “You should be ashamed,” a beat cop tells Charley at one point—complimenting his intellect and deriding his character at the same time.
More honest than Charley, in a way, is Charley’s nemesis; a hustler named “Bridgeport White-eye” (John Harrington). White-eye works a blind-man angle 24/7. He even maintains it at Diamond Mike’s, preying on the sympathies of other crooks. We dislike him, but perhaps we shouldn’t; he simply refuses to make arbitrary distinctions between himself and his marks. For both these men, it is the gap between the characters they play and their true selves that constitute their identities—when that gap begins to close, they face oblivion. 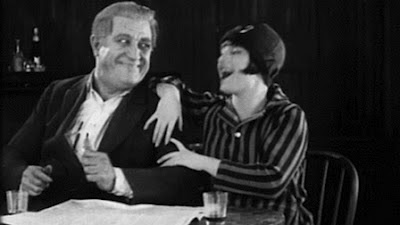 The Street of Forgotten Men is not well-known today. That’s a shame, because it’s the kind of movie that intrigues people, even if they only hear it described. If you do know it, it might be for histprical reasons: the film contains (barely) the screen debut of Louise Brooks. Playing White-eye’s girlfriend for all of five minutes, Brooks does little; but already the package is complete: flapper hat, bob, and flashy top all present and accounted for. Brooks’ magnetism was something else: the more disengaged she appeared on-camera, the more attention she drew. So it is here. Reviewers at the time seem to have singled her out.
I saw The Street of Forgotten Men at Cinefest 32 in Syracuse, NY; March 15, 2012. The print was excellent, but unfortunately missing the second reel. Because this reel is lost, no one is sure how Fancy dies (though tuberculosis is suspected); nor is it known if Charley married Fancy before she expired. If he did, it would make his later interactions with Mary much more interesting.
Posted by Chris Edwards at 4:13 PM